In His 50th anniversary year,Zimerman recives in a performance with the Berlin Philharmonic 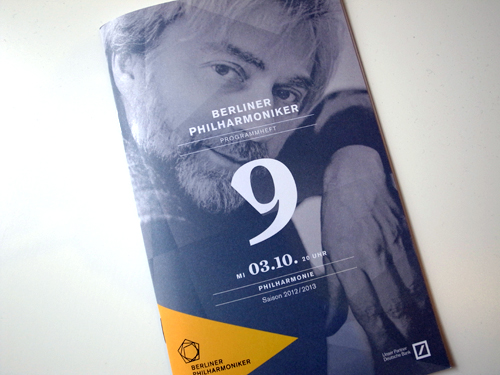 On October 3, Krystian Zimerman gave a recital in the large concert hall of the Berlin Philharmonic Orchestra. Zimerman and Berlin have a close connection. The pianist made his Berlin debut in 1976-the year after he won the Chopin Competition at the young age of 19-performing the Chopin Piano Concerto No. 1 with the Berlin Phil under the baton of Herbert Blomstedt. It goes without saying that the success of his performance led to subsequent concerts with Karajan and Bernstein. (Incidentally, Zimerman will perform with the Berlin Phil, conducted by Simon Rattle, several times this season.) This recital was presented by the Berlin Phil, with which Zimerman is closely associated, and marked the 50th year since his debut on the stage, so there was a palpable excitement at the venue, with a long line of people waiting to buy same-day tickets. It is said that the program was made up of works from the pianist’s career to date which are especially close to his heart. The first half was Debussy. Starting with “Pagode” from Estampes, Zimerman’s beautiful tone quality, emanating from the dimly lit stage, was breathtaking. In the Preludes that followed, his organizational powers shone as well. Selections from Book I started with “Voiles/Sails” and continued with “Minstrels,” “Des Pas sure la Neige/Footsteps in the Snow,” and “La Fille aux Cheveux de Lin/The Girl with the Flaxen Hair.” Most superb of all were the last two, “La Cathedrale Engloutie/The Submerged Cathedral” and “Ce qu’a Vu le Vent d’Ouest/What the West Wind Has Seen.” In the former, soft sounds of extreme delicacy gave the listener a floating sensation; while in the latter, the feeling of finely honed tension was overwhelming. Throughout, Zimerman maintained a refined nobility; his sound never became rough. The second half was made up of works from Zimerman’s own country, Poland. Szymanowski’s “Three Preludes” were filled with affection, capturing the pianist’s feelings for his homeland. Then came Chopin’s Piano Sonata No. 3. Surely there are many pianists in the world who play this work splendidly; but how many besides Zimerman can perform it with not only perfect technique but also with richly poetic feeling, and sparkling brilliance combined with grounded interior reflection? For this writer it was a rare experience to be so deeply stirred by the music of Chopin. While the enthusiastic applause continued, Zimerman, still seated on the piano bench, turned toward the audience and began to speak haltingly.”When I first played with the Philharmonic in 1976, there was a wall right nearby and the surrounding scenery was very different. Today I am honored to be able to perform here. Not including a work by a German composer in today’s program was impolite to all of you. Now I would like to perform one last piece.” So saying, Zimerman began to play the first movement of Beethoven’s Moonlight Sonata. The plaintive melody-surprisingly-changed to a major key, and at some point turned into the tune of “Happy Birthday.” That day was the anniversary of German reunification. It seemed to me that Zimerman’s warm humanity had enveloped the entire hall. Under the headline “A Small Miracle,”Ｇｅｒｍａｎ nｅｗsｐａｐｅｒ Der Tagesspiegel gave the recital a rave review. In his performances in Japan this December, there is no doubt that you will see a Krystian Zimerman truly at the height of his powers.?