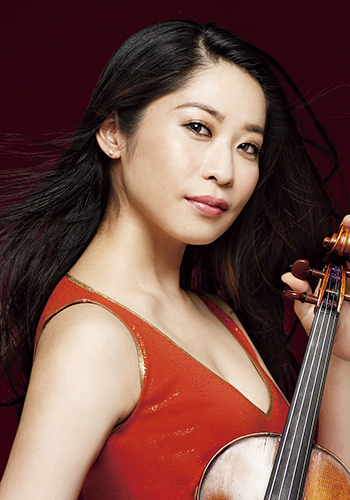 Silver medalist of the 2002 International Tchaikovsky Competition and the first-prize winner of the 2001 Pablo Sarasate International Violin Competition, virtuoso violinist Tamaki Kawakubo is a veteran of the concert stage. She has quickly established herself as a formidable artist possessing a masterful technique and a tone that “ranges from velvety soft to gripping drama”. She has performed with such leading orchestras as the Los Angeles Philharmonic, Rochester Philharmonic, Naples Philharmonic and the Detroit, Houston, Forth Worth, Cincinnati, Toledo, Quebec, Baltimore, New York Chamber, San Francisco, Syracuse, North Carolina, Greensboro, Tucson, San Diego, Tacoma, Spokane, Honolulu and Winnipeg Symphonies. After a highly successful collaboration with Michael Tilson Thomas and the New World Symphony in 2001-02, Miss Kawakubo began her 2002-03 season in the United States with the San Francisco Symphony and Michael Tilson Thomas in its opening concerts.
She also returned to the El Paso and Colonial (NJ) symphonies and collaborated with Larry Rachieff and Symphony II in Chicago. Other engagements include performances with the Berlin Sinfonie Orchestra under E. Inbal and the MDR Sinfonie Orchestra under Fabio Luisi. She also performed numerous recitals in Spain, Germany, Lithuania, Sweden, Russia and Japan.
Miss Kawakubo’s 2000-01 season in the United States included appearances with the Pacific, Seattle, Hilton Head (SC) and Indianapolis symphonies, the Fresno Philharmonie and a recital at the Cummer Art Gallery in Jacksonville, Florida. Additionally, Miss Kawakubo performed the Chaconne from John Corigliano’s soundtrack to the film The Red Violin with the EOS Orchestra at New York’s Lehman Center, with the composer in attendance. In Summer 2001, She appeared in recital in Guatemala City and Angigua, Guatemala under the auspices of the Japanese Embassy in Guatemala and returned again in summer 2002.
Tamaki Kawakubo’s 2002-2005 seasons have included performances in Japan with its leading orchestras such as the Yomiuri Symphony Orchestra, Sapporo Symphony, Tokyo Symphony, Tokyo Metropolitan Symphony, Kyushu Symphony, Kyoto Symphony, Kanazawa Ensemble and Hiroshima Symphony. In 2003, Miss Kawakubo’s debut CD of concertos by Mendelssohn and Tchaikovsky was released by Avex Classics.
Previous summers were highlighted by Miss Kawakubo’s chamber music collaboration with Christoph Eschenbach at Germany’s Schleswig-Holstein Festival. She performed with Maestro Eschenbach at Chicago’s Ravinia Festival where she had appeared previously in recital on the festival’s prestigious “Rising Stars” series. The Chicago Tribune wrote, “She played with great poise and assurance, molding her big sound to Eschenbach’s athletic pianism in an unfailingly musical manner.” In recent summers she has appeared at the Blossom Music Festival with the Cleveland Orchestra under the direction of Jahja Ling, at New York’s Mostly Mozart Festival; toured japan as soloist with the Mostly Mozart Festival Orchestra with Gerard Schwarz Condicting; and appeared with the Boston Pops and John Williams.
In addition to her career as soloist, she enjoys chamber music and has performed at the Ulverston International Chamber Music Festival, in Cyprus and in Moscow. She is also featured on the soundtrack for the new cartoon series “Little Amadeus” which is broadcast in Germany (KiKa), (ARD) and in Europe.
In May 2007, her second CD album “Recital!” was released and has been recommended by many music magazines. In November 2011, her New CD album “Frank&Prokofiev” by Avex Classocs.
Winner of a 1997 Avery Fisher Career Grant, Miss Kawakubo began her violin studies at the age of five in Los Angeles. She studied with Robert Lipsett at the R.D. Colburn school of Performing Arts in Los Angeles and with Dorothy Delay and Masao Kawasaki at the Julliard School. She recently completed her studies with Zakhar Bron at the Hochschule for Music in Zurich.
In recent years, Miss kawakubo has been active in chamber music, performance in piano trio in japan
and in a string trio, piano quartet in Europe. 2010,2011 seasons will include concert in Jerusalem, Tel Aviv, Haifa, Tokyo, and other cities in Japan.（April 2016）
Read more