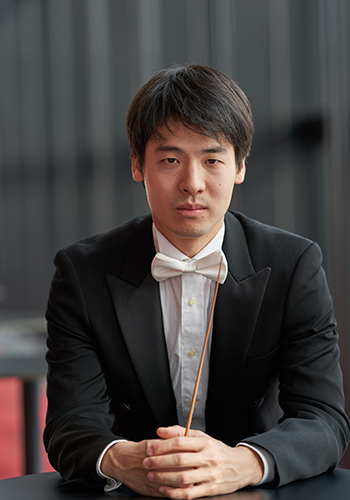 Born in Osaka in 1993.
Matsumoto graduated Conducting Course of the Tokyo University of the Arts, and awarded Acanthus Prize upon graduation. He played violin while he was young and was a member of the Century Youth Orchestra.
Matsumoto studied conducting from Tadaaki Otaka, Masahiko Kurano, Ken Takaseki and Yoshikazu Tanaka. While he was a student, he participated in masterclasses held by Douglas Bostock, and Parvo Jarvi. His mentors for the violin were Kazuki Sawa and Chieko Sogabe.
He has been a researcher of the Tokyo City Philharmonic Orchestra for 2 years since 2017, and will assume the Conductor of the Sapporo Symphony Orchestra from April 2019.
Matsumoto has guest conducted Osaka Symphony Orchestra, Sapporo Symphony Orchestra, Yamagata Symphony Orchestra and Tokyo City Philharmonic Orchestra.
His name, Shurihito was named by Mrs. Schuricht, after the world famous conductor, Carl Schuricht.