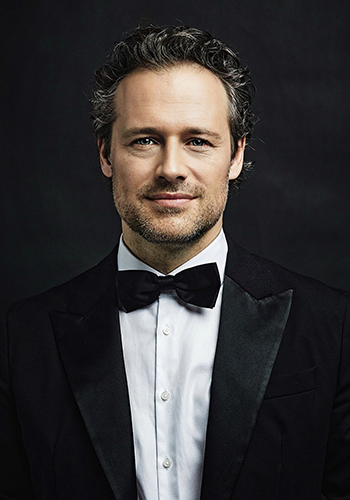 Born in Vienna, Sascha Goetzel had his first violin lessons with his father at the age of five, and at eleven his first conducting classes with Prof. Richard Österreicher. At 19 he was a member of the Vienna State Opera, where he was given decisive impulses by great conductors such as Zubin Mehta, Mariss Jansons and Seiji Ozawa.

Ozawa also became his teacher and invited him with a conducting fellowship to the Tanglewood Festival.
Further conducting studies followed with Jorma Panula and at 24 he took over the musical direction of the Austrian-Korean Philharmonic in Vienna.

He has been Artistic Director and Principal Conductor of the Borusan Istanbul Philharmonic Orchestra since 2008 and achieved high artistic standards and international recognition within a few years for this hitherto barely known body of musicians, which has performed at the Salzburg Festival (2010) and made a brilliant debut at the BBC Proms (2014).

Countless international reviews underscore his charismatic personality and stylistic security, which ranges from pre-classical to contemporary music, and which has given him the ability to draw peak performances from orchestras. Sascha Goetzel was Resident Conductor of the Pacific Music Festival in Japan, musical director of the Attergau Orchestra Institute which operates under the aegis of the Vienna Philharmonic, and Principal Guest Conductor of the Kanagawa Philharmonic and the Orchestre Symphonique de Bretagne. After a six year tenure of the music directorship of the Kuopio Symphony in Finland he remains a regular guest with the orchestra.

He is the Artistic Director of Istanbul’s Barış İçin Müzik Vakfı/Music for Peace Foundation and works closely with young people in music education, development and performance.

His spectacular work with the Borusan Istanbul Philharmonic Orchestra has been documented in three CDs released by Onyx. The first featured orchestral works by Respighi, Hindemith and Florent Schmitt, the second is entitled Music from the Machine Age, and both received superb reviews. A third recording featuring Rimsky-Korsakov’s ‘Scheherezade’ and other Western works with oriental influences was awarded “5 stars for the performance and 5 stars for the sound” by BBC Music Magazine. A 2014 recording of works by Bach and Schnittke with the Orchestre de Chambre de Paris and Deborah and Sarah Nemtanu, and CDs in 2015 and 2017 for Deutsche Grammophon with his Borusan Istanbul Philharmonic with accordeonist Ksenija Sidorova and violinist Nemanja Radulovic complete a varied and fascinating discography.

the Yomiuri Orchestra in Tokyo, a concert with the Geneva Chamber Orchestra and Joyce Di Donato, as well as the Turkish première of Der Rosenkavalier, in which young Turkish singers prepared roles at the Borusan Vocal Academy and sang alongside international stars. Kuopio, Helsingborg and Guadalajara are his concert venues before the season ends, as well as performances of Rosenkavalier and Rigoletto at the Vienna State Opera.