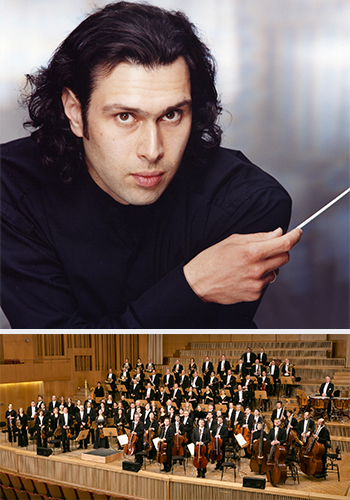 < Rundfunk-Sinfonieorchester Berlin (Berlin Radio Symphony Orchestra) >
The Rundfunk-Sinfonieorchester Berlin (RSB, Berlin Radio Symphony Orchestra) dates back to the first hour of musical broadcasting by Deutscher Rundfunk in October 1923. Today it is one of Berlin’s leading orchestras offering an exciting and unusual concert programme. Vladimir Jurowski has been the Chief Conductor and Artistic Director of the RSB since autumn 2017. Previously, the orchestra had been led by Marek Janowski from 2001 to 2015.

As a member of the Rundfunk-Orchester und -Chöre GmbH Berlin (roc berlin), founded in 1994, the RSB enjoys close links to Deutschlandfunk Kultur, Deutschlandfunk and Rundfunk Berlin-Brandenburg. Its cooperation with these broadcasters not only ensures radio transmission of most concerts but also some positive effects in CD production. After major Wagner and Henze editions with Marek Janowski, a new chapter of recording activity has begun under the direction of Vladimir Jurowski. For more than 50 years now, the RSB has been a regular guest in Japan and Korea, as well as at German and European festivals, and music centres all over the world.

< Vladimir Jurowski (Chief Conductor and Artistic Director) >
Vladimir Jurowski is one of the most sought-after conductors of our time, enjoying international acclaim for his outstanding musical ability and a consistently adventurous artistic approach. He has been Chief Conductor and Artistic Director of the Berlin Radio Symphony Orchestra (RSB) since September 2017. He was born in Moscow, where he began his musical education at the conservatoire. In 1990, he and his family moved to Germany, where he completed his studies at the colleges of music in Dresden and Berlin. His international debut was at the Wexford festival as well as the Royal Opera House Covent Garden in 1995.

Vladimir Jurowski was appointed Principal Guest Conductor of the London Philharmonic Orchestra in 2003, becoming its Principal Conductor in 2007. In addition, he is Artistic Director of the Russian Academic State Orchestra “Yevgeny Svetlanov”, Principal Artist of the Orchestra of the Age of Enlightenment, and Artistic Advisor to the “ensemble unitedberlin”. In 2015 he was also appointed Artistic Director of the George Enescu Festival in Bucharest. It was announced in March 2018 that he is to become Generalmusikdirektor of the Bavarian State Opera as from the 2021/2022 season. In the past he has held positions including First Kapellmeister of the Komische Oper Berlin (1997-2000) and Musical Director of Glyndebourne Festival Opera (2001-2013). In March 2016 he was awarded an honorary doctorate by the Royal College of Music in London.

Vladimir Jurowski conducts top orchestras in Europe and North America, such as the Dresdner Staatskapelle, the Gewandhaus Orchestra Leipzig, the Royal Concertgebouw Orchestra Amsterdam, the Boston, Cleveland and Philadelphia orchestras, and the New York Philharmonic, as well as the Berlin and Vienna philharmonic orchestras. He also appears regularly at international festivals such as the BBC Proms, and since 1995 he has worked at major international opera houses, incl. at the Metropolitan Opera New York, the Welsh National Opera, the Scala in Milan, the Bolshoi Theatre, and the Dresden Semper Opera.

He returned to Glyndebourne Opera in 2017 for the world premiere of Brett Dean’s “Hamlet” and shortly afterwards he made his debut at Salzburg Festival with Alban Berg’s “Wozzeck”. In 2018 he conducted new productions of Modest Mussorgsky’s “Boris Godunov” at Opéra National de Paris and Franz Schreker’s “Die Gezeichneten” at Zurich Opera House.