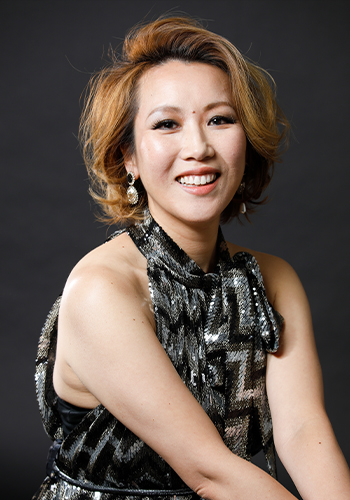 Mari Moriya was born in Oyama, Tochigi Prefecture. After graduating from Musashino Academy of Music and its graduate school at the top of the vocal music major class, she continued her studies at the Mannes College of Music in New York and received a Professional Studies Diploma.

In 2019, Moriya had the honor of performing a solo rendition of the national anthem of Japan in the “National Festival to Celebrate the Enthronement of the Emperor.”

Moriya is a recipient of numerous awards in international competitions, including first prizes in the 5th Veronica Dunne International singing competition, the 2nd Charles Charles A. Lynam Vocal Competition and the Kura Muse competition; the Concert Prize and the Japan representative honor at the Cardiff International Competition. She was also a finalist in the Metropolitan Opera National Council Auditions.

In 2006, Mari Moriya made a stunning debut at the Metropolitan Opera in New York as Queen of the Night in The Magic Flute under the baton of James Levine. Since then she has performed this role numerous times with leading opera companies including Volksoper Wien, Oper Leipzig, Scottish Opera, Glyndebourne Touring Opera, Seattle Opera, Palm Beach Opera, Pittsburgh Opera, Portland Opera, Landestheater Linz, Theater Basel, Baltimore Symphony Orchestra, and Washington National Symphony Orchestra at the Kennedy Center in Washington, D.C.

In the United States, in addition to Queen of the Night, she has sung roles such as Adina in L’elisir d’Amore with the Tulsa Opera, the title role in Lucia di Lammermoor at Indiana University, Juliet in Romeo and Juliet with the Center City Opera Philadelphia, Susanna in Le Nozze di Figaro with the Connecticut Opera, and Amina in La Sonnambula with the Opera Orchestra of New York.

Moriya made her first appearance in Europe with Opera Ireland as Liù in Turandot, and returned to the same theatre as Zerbinetta in Ariadne auf Naxos and Zerlina in Don Giovanni. She also appeared at Opera Vlaanderen as Queen Tye in Philip Glass’s Akhnaten and as Miss Schlesen in Glass’s Satyagraha.

As a member of the ensemble of the Landestheater Linz in Austria between 2010 and 2014, Moriya performed the title roles in Lakmé and Maria Stuarda, Sophie in Der Rosenkavalier, Gilda in Rigoletto, Fiordiligi in Cosi fan Tutte, Mimi in La Boheme, Clorinda in La Cenerentola, The Lost, composed by Philip Glass, Micaëla in Carmen, Pamina, Woglinde in Das Rheingold, Helmwige in Die Walkure, Violetta in La Traviata, and Lara in the world premiere of Terra Nova, composed by Moritz Eggert.

In Japan Moriya made her opera debut in 2014, performing Gilda in Rigoletto at Biwako Hall. Since then she has performed Queen of the Night in The Magic Flute with Tokyo Nikikai Opera Theatre; Titania in A Midsummer Night’s Dream at Hyogo Performing Arts Center; Pamina in The Magic Flute at the Aichi Triennale; and Pamina, Konstanze in Die Entfuhrung aus dem Serail, and the title role in Lucia di Lammermoor at the Nissei Theatre. She performed Freia in Das Rheingold, Sieglinde in Die Walküre, Gutrune in Götterdämmerung, Elsa in Lohengrin, and Rosalinde in Die Fledermaus in productions by Biwako Hall; Leonora in Il Trovatore with Mikawa Citizen Opera; Marschallin in Der Rosenkavalier and the title roles in Madama Butterfly and Salome with Tokyo Nikikai; Drusilla and Fortuna in L’incoronazione di Poppea with the Bach Collegium Japan; and Miss Silberklang in The Impresario and Konstanze in Die Entführung aus dem Serail at the Chofu International Music Festival. All of these performances were highly praised.

Moriya also has a wide-ranging concert repertoire. She has appeared with many orchestras in performances of works including Baroque cantatas, Bach’s Passion Music, Handel’s Samson and Messiah, Mozart’s Mass in C Minor, and Pergolesi’s Stabat Mater. She has also performed in Mozart’s Requiem, Verdi’s Requiem, Dvorak’s Te Deum, the soprano solo in Beethoven’s Ninth Symphony, Carmina Burana, and the soprano solos in Mahler’s Symphonies No. 8、No. 2 and No. 4.