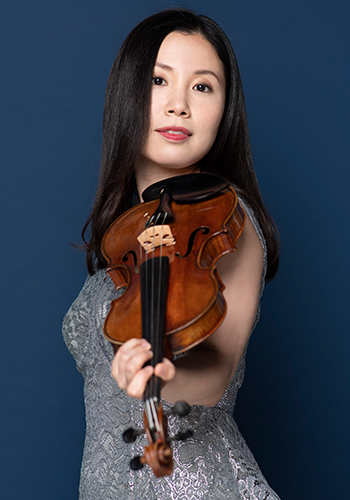 Born in Fukuoka in 1984, she began playing the violin at the age of three and took her first violin lessons from Akira Kajita. After she moved to Tokyo, she continued her studies with Ryo Date and Akuri Suzuki. At the age of six she entered the Music School for Children at Toho Gakuen School of Music, and thereafter she was mentored by Yoshio Unno. In 1997, at the age of thirteen, she became the youngest prize winner ever at the Paganini Competition in Italy. She later won first prize at the Music Competition of Japan in 2001 and the Paganini Moscow International Competition in 2006. She is also a prize winner at the Long-Thibaud, Queen Elisabeth and Fritz Kreisler violin competitions. In 2009 she was invited to perform the Paganini Concerto No.1 and the Vieuxtemps Concerto No.4 in the big hall of the Moscow Conservatory, accompanied by the Moscow State Symphony Orchestra. The following year she returned to Moscow to perform the Vieuxtemps Concerto No.5 with Pinchas Zukerman in the Kremlin. She moved to Europe in 2003 and started studying with Gérard Poulet at the Conservatoire National de Région and at the Ecole Normale de Musique de Paris. In 2004 she began studying with Boris Belkin at the Maastricht Conservatorium in the Netherlands, where she completed her master’s degree. She also took part in the summer course at the Accademia Chigiana in Italy, and in 2012 she was invited to its winter series to perform all Brahms sonatas. In addition to regular appearances with most of major Japanese orchestras, she has also performed with international orchestras in Russia, the Netherlands, Italy, France, Belgium, Spain, and Taiwan, and collaborated with celebrated conductors such as Roberto Benzi, Myung-whun Chung, Gabriel Chmura, Yuri Bashmet, Eliahu Inbal, Hanns-Martin Schneidt, Günter Neuhold, Charles Olivieri-Munroe, Kazuhiro Koizumi, Kenichiro Kobayashi, and Junichi Hirokami. She is also a noted chamber musician. She has recently worked with artists such as Jean-Claude Vanden Eiden, Pascal Moragues, Yuzuko Horigome and David Cohen. She also enjoys her collaboration with cellist Ayano Kamimura and pianist Yoko Kikuchi as a trio. She released her first album in March 2019 on KING INTERNATIONAL. This CD won the Excellence Award a recipient of the Agency for Cultural Affairs. Since 2012 she has held a professor position at the Maastricht Conservatorium in the Netherlands. She plays a Stradivarius violin (1727), on loan from the Suntory Foundation for Arts.