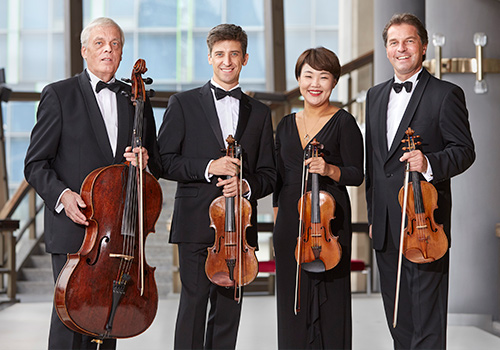 It is the oldest, uninterrupted existing
string quartet in the world. Founded almost 200 years ago, the Leipzig Gewandhaus-Quartett can be seen as a remarkable part of the western history of music. Shortly after its foundation in 1808 by the former leader of the Gewandhaus Orchestra Heinrich August Matthäi the ensemble, whose chamber music concerts immediately attracted a lively response from the public, established itself as a permanent part of the Leipzig concert scene and became a highlight of Saxon music tradition. Since then the quartet has continued its concert activity from generation to generation until today with great success.

In the 19th century the quartet’s style of playing
was first and foremost influenced by the members Ferdinand David, to whom Mendelssohn dedicated his violin concerto, and Joseph Joachim, who gave the first performance of Brahm’s violin concerto. The current members of the Gewandhaus-Quartett maintaining the heritage of this unique ensemble today have been playing together since 1993. Traditionally the quartet consists of the leaders of the Gewandhaus Orchestra.

The ensemble gave the first performance
of about 100 works, among others by Felix Mendelssohn Bartholdy, Robert Schumann, Antonín Dvorák, Max Bruch and Max Reger often in the presence or with the assistance of the composers. Even today the quartet dedicates itself not only to the classical repertoire but especially to contemporary music. Recently the ensemble premiered the work ‘Deciso’ by the Leipzig composer Olav Kröger as well as Günther Kochan’s piano quintet at the Leipzig Gewandhaus. Furthermore, they made a CD recording of Ermano Maggini’s string quartet.

During the history the ensemble played
with such important musicians as Clara Schumann, Johannes Brahms, Edvard Grieg and Arthur Nikisch. This tradition is still kept today, and the Gewandhaus-Quartett works with internationally renowned artists such as Yo-Yo Ma, Menahem Pressler and Sabine Meyer. In addition to their regular performances at the Leipzig Gewandhaus (the quartet has its own chamber music series there) the four musicians very successfully appeared at major music centres in Europe, Japan, Argentina and the USA. Furthermore, the Gewandhaus-Quartett gave concerts in private audiences of the Japanese emperor Akihito and the British heir apparent Prince Charles.

Many CD recordings demonstrate
the high international reputation of the ensemble. The current members of the quartet have already recorded various CDs for NCA including a CD with the late string quartets by Beethoven, the recording of works by Shostakovitch, Stravinsky and Prokofieff and a CD with string quartets by Schumann and Mendelssohn which were formerly premiered by the Gewandhaus-Quartett.

The quartet took part also in the production
of films about classical music by the Japanese broadcasting corporation NHK, playing quartets by Haydn, Beethoven, Schubert and Mendelssohn Bartholdy.