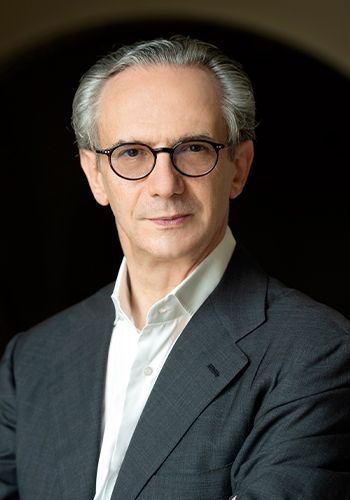 He is music director of the Festival della Valle d’Itria in Martina Franca(Apulia)and has appeared as guest conductor with numerous renowned ensembles, including the Philadelphia Orchestra, The Cleveland Orchestra, the NHK Tokio, the Münchener Philharmoniker, the Filarmonica della Scala, the London Symphony Orchestra, the Concertgebouw Orkest Amsterdam, and the Saito Kinen Orchestra, as well as with various prominent opera orchestras. He appeared at the Salzburg Festival with performances of Richard Strauss’ Die Liebe der Danae und Die Ägyptische Helena. His most important appearances at the Opernhaus Zürich include, among others, the new productions of three Bellini operas, as well as Rigoletto, Fidelio, Wozzeck and Verdi’s Messa da Requiem.

Important CD recordings include Verdi’s Aroldo, Bellini’s I puritani and I Capuleti e i Montecchi, and the complete symphonies of Robert Schumann, as well as the symphonies and the oratorio Das Buch mit sieben Siegeln by Franz Schmidt, the largely forgotten Austrian composer. In addition, he has recorded various symphonic poems by Richard Strauss, and a lauded reading of Bruckner’s Symphony No. 9 with the Staatskapelle Dresden. His recordings of Siegfried and Götterdämmerung with the Metropolitan Opera Orchestra won Grammy awards. He received the Premio Franco Abbiati, the coveted Italian critics’ prize, in 2013, and in 2014 won the Grifo d’Oro from the city of Genoa. He was awarded the Anton Bruckner Ring by the Wiener Symphoniker, and named both Cavalier of the Italian Republic and Commendatore della Stella d’Italia.