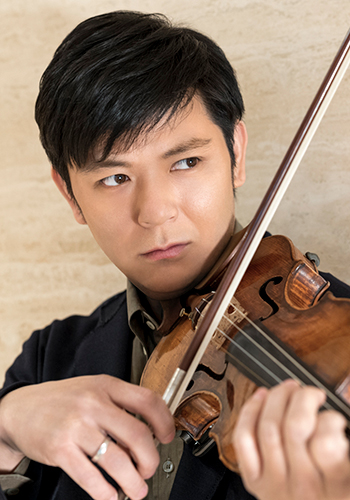 Daishin Kashimoto is First Concertmaster of the Berliner Philharmoniker and a soloist in high demand across the globe. He is first prize winner of a long list of competitions, including the “6th Menuhin International Junior Violin Competition” in England in 1993, the “International Competition for Violinists in Cologne“ in 1994 and in 1996, both the “International Fritz Kreisler Violin Competition” in Vienna and the “Marguerite Long-Jacques Thibaud International Competition for Piano and Violin” in Paris.
He has performed with a list of orchestras that includes the Boston Symphony, Orchestre Nationale de France, Bavarian and Frankfurt Radio Symphony orchestras, Dresden Staatskapelle, Vienna Tonkunstler Orchestra, Orchestre de la Suisse Romande , St. Petersburg Philharmonic, and Czech Philharmonic as well as the NHK Symphony. He has performed with conductors Seiji Ozawa, Lorin Maazel, Yuri Temirkanov, Eliahu Inbal, Marek Janowski, Semyon Bychkov, Sir Simon Rattle, Mariss Jansons, Charles Dutoit and Paavo Jarvi amongst many others.
Kashimoto is also active in the field of chamber music, and has performed with noted musicians such as Martha Argerich, Eliso Virsaradze, Vadim Repin, Gidon Kremer, Yuri Bashmet, Gérard Caussée, Mischa Maisky, Paul Meyer, Emmanuel Pahud, Radek Baborak and others. Since 2007, he has served as music director at annual international chamber music festival “Le Pont” in Ako and Himeji in Japan.

From 2010 to spring 2013, Kashimoto performed and recorded all of the Beethoven violin sonatas together with pianist Konstantin Lifschitz, and they received high praise for their concerts throughout Japan spanning three tours. The complete CD box of Beethoven: Complete Violin Sonatas, was released worldwide on Warner Classics in January 2014. Previously he released various other CDs including the Brahms Violin Concerto with the Dresden Staatskapelle and Myung Whun Chung for Sony.

Kashimoto was born in London and took his first lessons from Kumiko Etoh in Tokyo. In 1986 he was the youngest ever student accepted to attend the pre-college division of the Juilliard School of Music in New York, studying with Naoko Tanaka and in 1990 he accepted an invitation from Zakhar Bron to study with him in Germany and so he moved to the Lübeck Musikhochschule. From 1999 to 2004 he was a pupil of Professor Rainer Kussmaul at the Freiburg Musikhochschule and completed the master’s course there, winning the Gustav Scheck prize.
Kashimoto has received a number of prestigious awards, such as the Arion Award(1995); both the Idemitsu and Mobile Music Awards(1997); the Fresh Artists Award of the Nippon Steel Music Awards(1998), The Minister of Education, Culture, Sports, Science and Technology’s Art Encouragement Prize for New Artist(1998); the Cultural Award from Hyogo Prefectural Goverment (2011); the Change Maker 2011 award in Japan; and the Steigenberger and Davidov Awards In Germany. Daishin Kashimoto plays on a Guarneri del Gesu 1744「de Beriot」violin kindly loaned by Asuka Corporation and its chairman Mr. Hikaru Shimura.