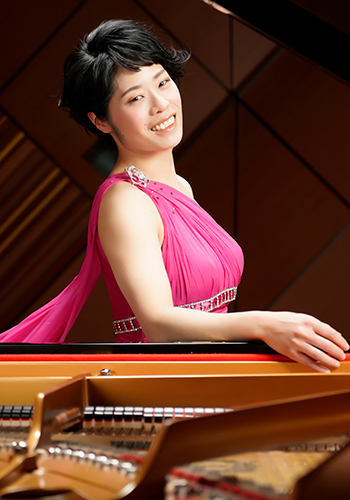 Ayako Uehara became the focus of international attention after winning the first prize in the 12th International Tchaikovsky Competition in Moscow, 2002.

Other performances with orchestras include engagements with the Vienna Symphony Orchestra with Fabio Luisi, Dresden Philharmonic with Simone Young, Russian National Orchestra with Mikhail Pletnev, Toscanini Philharmonic with Lorin Maazel, the Berlin Radio Orchestra and Marek Janowski on their tour of Japan, and the New Japan Philharmonic with Seiji Ozawa. In May 2010, Ayako Uehara toured in Japan with the State Symphony Orchestra “Novaya Rossiya” led by Yuri Bashmet, performing Tchaikovsky’s piano concerto No. 1 and winning critical acclaim. In March 2017, she performed with Konzerthaus Orchester Berlin and Eliahu Inbal in Berlin as well as in four cities in Japan, earning high praise.

In recital, Ayako Uehara tours Japan each season. In 2003 she made her London debut at Wigmore Hall and returned there in 2005. Other recitals include debuts in Italy, in Varese and Cervara, for the Fondo per l’Ambiente Italiano; and at the Ruhrgebiet Piano Festival (2003), the International Chopin Festival, Poland (2002 and 2005), and the Dubrovnik Festival, Croatia (2003). In 2007/08 Ayako made her recital debuts in Copenhagen and at the Tonhalle, Zurich. In August 2010, she participated in the 65th International Chopin Piano Festival in Duszniki, Poland.