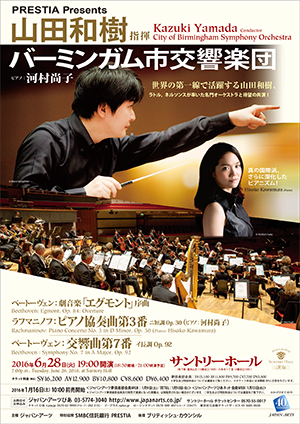 [Purchase tickets]
Tickets can be purchased either by phone or online.

Please read the following link before purchasing tickets.
How to purchase tickets

Born in Nishinomiya (Japan), moved to D?sseldorf (Germany) with her family at the age of 5, where she started to study piano under Kyoko Sawano.
There are two mentors in Kawamura’s musical education: Malgorzata Bator-Schreiber in G?ttingen who built her up musically and artistically, and Prof. Vladimir Krainev at the Hannover University of Music and Drama who developed her further to an artistic personality.

She has released ‘Chopin Ballades’ as her third album this fall from the RCA Red Seal label. Her previous releases include ‘Hisako Kawamura plays Chopin’ released as Super Audio CD and ‘Chopin Sonata No. 3 and Schumann Humoresque’ both receiving high acclaims from music critics. Other recordings include works of Mozart, Schubert and Prokofiev released from “DiscAuver” label, and works by Schubert and Schumann from “audite” label.

She has been encouraged by numerous scholarships from prestigious organizations, including the German piano company Ibach, the European Yamaha Foundation, Deutsche Stiftung Musikleben and Rohm Music Foundation.

In Japan, Kawamura’s music activity was awarded the prestigious Art Encouragement Prize for New Artists of Music in spring of 2012 from the Minister of Education, Culture, Sports, Science and Technology. She was also awarded by three important Music Prizes in 2009; the Fresh Artist Music Prize of the Nippon Steel Corporation, the IDEMITSU Music Prize of Idemitsu Kosan and the Prize of the Chopin Society Japan.

Sir Edward Elgar conducted the inaugural concert of the City of Birmingham Orchestra in November 1920. Over the nine decades since, the City of Birmingham Symphony Orchestra (CBSO) has grown into a 90-piece ensemble with a worldwide reputation – but one rooted firmly in the City of Birmingham.
Under the direction of such conductors as Adrian Boult, Andrzej Panufnik and Louis Fr?maux, the Orchestra’s reputation grew steadily. But it was the 18-year leadership of Sir Simon Rattle that truly put the CBSO ? and Birmingham ? on the international musical map. Since his departure in 1998, the CBSO has continued to flourish and grow, first under the baton of Sakari Oramo and since September 2008 under the charismatic young Latvian Andris Nelsons. Nelsons now leads an outstanding artistic team which includes principal guest conductor Edward Gardner, associate conductor Michael Seal, and chorus director Simon Halsey.
As the resident orchestra of Symphony Hall, Birmingham, the CBSO has a wide reaching programme of music ranging from Beethoven to Bollywood, symphonic and contemporary classical, as well as a lighter series of Friday Night classics, and concerts that the whole family can enjoy. It works with some of the best internationally regarded artists such as Jonas Kaufmann, Mitsuko Uchida and Ian Bostridge, alongside up-and-coming talents and even personalities such as Mark Kermode and Mark Williams.
In recent seasons, the Orchestra has given performances to capacity audiences in some of the most prestigious European concert halls and festivals. This season, Andris and the Orchestra will take on the biggest-ever touring schedule, with 35 overseas concerts over the next 12 months. Countries include Japan and Taiwan and will include performances by Hilary Hahn and H?l?ne Grimaud.
The Orchestra also continues to extend its sizeable discography, working with several leading record labels. After numerous award-winning recordings under Sir Simon Rattle and Sakari Oramo, the CBSO’s first CD with music director Andris Nelsons was released in June 2009, heralding the start of an ongoing relationship with the German label Orfeo.
The CBSO’s learning and participation work reaches over 35,000 people each year in diverse communities across the West Midlands, and ranges from projects bringing music to nurseries in disadvantaged areas of the city, to work developing the next generation of talented young musicians.
The CBSO family also includes the CBSO Chorus; two auditioned choirs for young people, the CBSO Children’s and Youth Choruses; two unauditioned community choirs, the adult choir CBSO SOVocal in Selly Oak, and CBSO Young Voices in partnership with Birmingham Music Service; the CBSO Youth Orchestra; and a wide range of chamber ensembles from within the orchestra who perform at CBSO Centre and beyond.