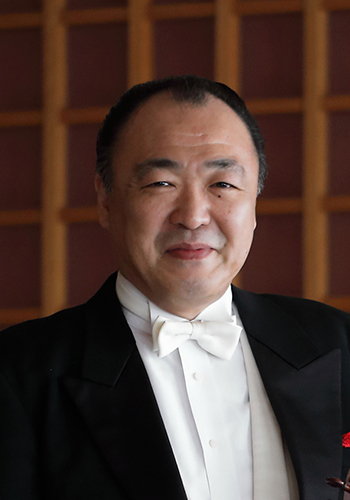 Born in Tokyo in 1964, he studied under Toshiya Eto and Angela Eto at the Toho Gakuen School of Music. While studying at Toho Gakuen, he began performing as a soloist on both the violin and viola, as well as performing chamber music and as a concertmaster.
In 1986 he graduated was appointed principal concertmaster for the New Japan Philharmonic at the tender age of twenty-two.
He also served as the concertmaster for the Saito Kinen Orcehstra, the Japan Virtuoso Orchestra and others after that and earned the unwavering trust of many conductors and orchestras. From 1997 in response to their strong request, he has served as concertmaster at both the Kyushu Symphony Orcehstra and the New Japan Philharmonic, which has gained him inordinate attention.
He made his recital debut as a soloist at Suntory Hall in 1988, and after that has performed together with the many Japanese and international orchestras including the Berlin Radio Symphony Orchestra, Bashmet & the Moscow Soloists, the London Mozart Orchestra. Also, be 1991, 1992 and 1994 he planned and performed self-produced concerts, showing his many talents.
As a chamber performer, he brought together the Halley String Quartet, and until 2000 was also a member of the resident quartet of the Casals Hall. Then, he began to actively participate in many chamber music projects with groups including the Mito Quartet, the Suntory Festival Soloists, the Virtuoso Ensemble Parthenon, the Ishihara Lyric Ensemble, Kamakura Solisten, JAYCMS, and the Yamagata Quartet. Also, he worked with some of the world’s top artists including Isaac Stern, Yo-Yo Ma, Martha Argerich, Pichas Zukerman, Mischa Maisky and Richard Stoltzman. Every year he is invited to music festivals in Japan and around the world including in Okinawa, Miyazaki, Kurashiki, Kita-Kyushu, Ogaki, Kirishima, Yatsugatake, Nagano Aspen, not to mention in 1995 and 1996 he performed as the only Japanese artist to be invited to the Santa Fe Chamber Music Festival.
In March 2000 he held a recital at the Kioi hall, and from October of that year until October of 2001 he performed a 3 concert series of Beethoven Sonata Recitals with pianist Takahiro Sonoda. In 2003 in “An Evening of Concertos with Yasushi Toyoshima” with the New Japan Phil he performed the violin concertos of Sphor, Vieuztemps and Viotti in one evening. In 2004 he made his debut as conductor. He continues to develop his activities aggressively.
Currently he is still serving as the concert master of both the Kyushu Symphony Orchestra and the New Japan Philharmonic. Since 2005, he has also served as the concertmaster of the Hyogo Performing Arts Center Orchestra. In 2006 he celebrated the 20th anniversary of his debut with a Kyushu tour of the Mozart Violin Concerto Zyklus and in Octoaber performed the Brahms Horn Trio MILOSBOK arrangement “Concerto for Horn and Violin”.
He has released 3 solo albums through Pony Canon and his chamber album has received great reviews and has sold well worldwide.
Toyoshima was the recipient of the Muramatsu Prize and the first Idemitsu Prize in 1991 and the Cultural and Education Ministry’s New Artist of the Year Award in 1992. He also lectures at Toho Gakuin University and Graduate School. He is the Music Director of the Nagasaki Chamber Music Festival. He plays a 1719 Antonio Stradivarius.
（June 2020）
Read more