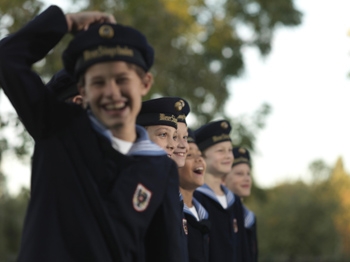 The Vienna Boys Choir was established in 1498.
The great Toscanini praised their singing, famously calling them “the voices of angels.” The VBC is one of the most popular and outstanding children’s choirs in the world.

The choir is made up of 100 boys aged 10 to 14, all of whom live and attend school at the Palais Augarten. For performance activities the members are divided into four groups (Chors) named after composers associated with the choir: Haydn, Mozart, Schubert, and Bruckner.
They also appear in many operas presented at the Vienna State Opera, and often perform with the Vienna Philharmonic Orchestra.

On their popular yearly tours of Japan, the Vienna Boys Choir performs in sold-out concert halls throughout the country.

When they sing contemporary Japanese songs like “A Thousand Winds” and “Home” (2008 tour), “Letter: Greetings to a 15-Year-Old” (2009 tour) and “The One and Only Flower in the World” (2010 tour), as well as international hits like “We Are the World” (2010 tour), they bring out the songs’ inner beauty and meaning with their clear, pure voices, touching the hearts of listeners. Although their 2011 tour had to be canceled due to the Great Eastern Japan Earthquake, the VBC held a charity concert in Vienna for the recovery of the affected area. It was the first time in the VBC’s history that all four groups performed together. The event was widely covered in the Japanese media, and the proceeds from the concert were sent to schools in the stricken region.

In 2012, after a two-year absence, the Vienna Boys Choir gave a tour of 35 concerts throughout Japan with one sold-out performance after another. The programs included the famous Kyu Sakamoto songs “I Look Up as I Walk” and “Look Up at the Night Stars.”