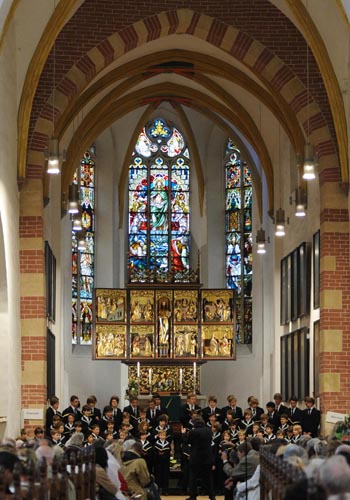 The beginning of the long and unique tradition of the choir dates back more than 800 years. Starting with the Augustinian Canons (“Augustiner-Chorherren”) in 1212 the choir experienced not only social change and upheaval, but was — and is valued even today — one of the oldest choirs in the world experiencing important societal events in the public sphere.

In the year 1212, a monastery of the Augustinian Canons was founded by a decree of the Margrave Dietrich von Meißen when Leipzig had just received its town and market charters. With the construction of the church dedicated to the apostle Thomas, a school was built at the same time, which was designated as schola exterior. St. Thomas School Leipzig was also open to children of Leipzig’s citizens and is thus regarded as Germany’s oldest public school. The boys and young men had to perform the liturgical music in the church setting in exchange for free board and lodge. Music, especially the musica sacra, was a very high priority in the medieval education. Seen as reflecting divine order, music played a very important role. The choir members, the so-called Thomaner, had from the outset the privilege and the obligation to sing at services such as baptisms, weddings, funerals as well as Council and University celebrations. They could rely on the St. Thomas School Leipzig for quality education, which could lead to university access.

At the beginning of the Reformation in Leipzig the St. Thomas School and its choir were placed under the patronage of the City in 1543. Thus, the choir is Leipzig‘s oldest cultural institution. Leipzig subsequently became an important center of music.

Many outstanding musicians have influenced the development of the choir as Thomaskantor and influenced the musical history of Protestant church music. They were not only important musicians and composers, but also important role models for the Thomaner. The 27-year lasting cantorship of Thomaskantor Johann Sebastian Bach made the most effective impression on Leipzig’s musical history and also on the THOMANERCHOR Leipzig.

The choir and the music of Johann Sebastian Bach delight countless visitors to St. Thomas Church Leipzig. THOMANERCHOR Leipzig is regularly a guest in prestigious concert halls around the world. The young singers have captured the attention of an ever-widening audience through excellent performances and extraordinary professionalism.

THOMANERCHOR Leipzig is a musical Ambassador to the world and annually attracts many thousand guests from all over the world to Leipzig and to the famous St. Thomas Church Leipzig.