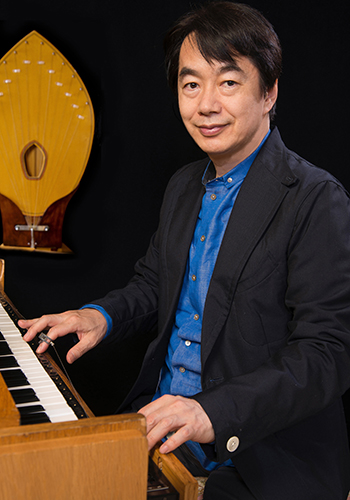 As a student, Takashi Harada performed as a multi-keyboard player in a rock band and made his professional start as a jazz pianist. Then he discovered the ondes Martenot, an instrument with an exceptional capacity for intense self-expression. He set off for France after his graduation from the economics department of Keio University, and later graduated with top honors from the ondes Martenot department of the Paris Conservatoire. Harada studied piano with Kazumi Kurihara and Keiko Toyama, and ondes Martenot with the late Jeanne Loriod.
The first Japanese musician ever to play the ondes Martenot as a solo instrument, Harada performs extensively as a soloist. In addition, he established the first ondes Martenot school in Asia in 2001, and with his development of an instrumental vocabulary and expansion of the repertoire for the ondes Martenot, Harada has been very actively involved in the cultivation of the next generation of ondists.
In the field of contemporary music, Harada is in the creative forefront. With the richness of his widely varied works, including music for movies, TV, animation and games, he has firmly established his standing as a composer. He has received numerous awards including the Idemitsu Music Prize, the Yokohama Culture Award, and the Music PEN Club Award.
Messiaen’s Turangalila-symphonie is one of the most famous, and the most frequently performed, work featuring the ondes Martenot as a central instrument. In 2008, the Messiaen anniversary year, Harada performed Turangalila-symphonie with the Deutsches Symphonie-Orchester Berlin, the Seoul Philharmonic Orchestra, NHK Symphony Orchestra, Kyushu Symphony Orchestra, PMF Orchestra, Orchestra of the Opera National de Lyon, and Boston Symphony Orchestra. To date he has performed the work over 330 times in 20 countries.
Harada composed the music for the latest (2012) edition of the original video animation One Off, directed by Junichi Sato.