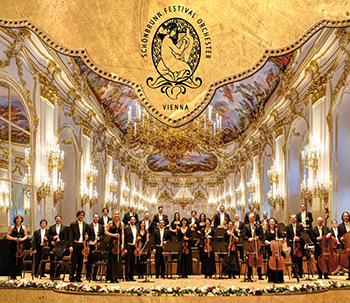 The Schoenbrunn Palace Orchestra Vienna is an internationally acclaimed Viennese chamber orchestra that translates the glamorous era of imperial Vienna into music which was founded by manager and producer Mr. Peter Hosek in 1997.

In addition to a high level of musical quality, this orchestra sets itself apart by interpreting music with a unified sound, a delightful stage presence and impeccable appearance.

The orchestra’s repertoire focuses on the works of Joseph Haydn, Franz Schubert and W.A. Mozart, furthermore it gives a particular key aspect at the ouvre by the Strauss family and other viennese composers of that era, like Suppé, Millöcker or Zeller as well as Lehar and Kalman.

The Schoenbrunn Palace Orchestra attaches great importance to Viennese-style interpretation of the pieces it plays. The orchestra excels in interpreting the works of classical Viennese composers and Viennese music with a subtle and individual touch, always adding that “Viennese” note.