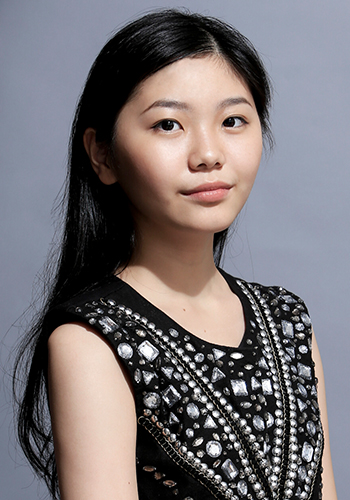 Born in May 2004, Shio Okui is in the 6th grade in elementary school. She has studied with Elena Ashkenazy since she was 7, and is currently a scholar of the Vladimir Spivakov International Charity Foundation. She made her orchestral debut at age 8, and at 12 she performed with the internationally renowned conductor Valery Gergiev and the Mariinsky Orchestra in Vladivostok, on the Maestro’s invitation. Since she was 10, she has performed numerous times with leading Russian conductor and violinist Vladimir Spivakov; and their concert of Mozart’s Piano Concerto No. 21, in which she appeared at age 11, was broadcast worldwide by Radio Orfey. At the festival hosted by the Vladimir Spivakov International Charity Foundation, “Moscow Meets Friends,” which marks its 13th edition this year, Okui was chosen as a soloist of the Grand Opening Ceremony representing the pianists of 2016, and performed at the opening of the festival with the Moscow Virtuosi under the baton of Mo. Spivakov.

Shio has been invited to overseas music festivals since she was 9 years old. She has performed at the I International Mariinsky Festival “Far East,” Vladimir Spivakov Invites…, ArsLonga Festival, ArtDialog, International Piano Festival “Lato z Chopinem,” Salacgriva International Classical Music Festival and others. She has appeared in concerts in Russia, the UK, Switzerland, Italy, Poland, Ukraine, Latvia and Armenia, among others. At the international music festival “Stars on Baikal” (Russia, 2014) directed by the pianist Denis Matsuev, and ”Sberbank-Debut” (Ukraine, 2013), Okui performed a concerto as soloist along with Matsuev for the grand opening of the festival. Her performances in Russia are frequently reported on by the Russia-K State TV channel.

In May 2016, Shio was selected as the youngest of the seven prize winners in the “Grand Piano Competition,” a unique competition in which the winners are not ranked, held in Moscow for the first time on the initiative of Mr. Matsuev. Her performance at the Grand Hall of the Moscow State Conservatory was broadcast by Medici.tv. On hearing her play, Evgeny Kissin said, “To understand and feel the music to this extent and have such a mastery of the instrument at her age is simply amazing.” (Quoted from Classical Music News, Russia) Other awards include the 1st Prize ”Discovery Prize” as the youngest participant in the Junior Group of the 1st Vladimir Krainev Moscow International Piano Competition (Moscow, 2015), 1st Prize and Special Prize/Junior group in the 2nd International Festival and Competition “Astana Piano Passion” (Kazakhstan, 2014), 2nd Prize/Piano Category and Audience Awards/All Categories in the 14th International Television Contest for Young Musicians “Nutcracker” (Russia, 2013), and 1st Prize and Special Prize from the Ministry of Culture/Categories A and D in the 10th International Competition for Young Pianists in Memory of Vladimir Horowitz “Horowitz-Debut” (Ukraine, 2013).

2015
1st Vladimir Krainev Moscow International Piano Competition, 1st Prize ”Discovery Prize”/Junior Group [13 and under], in which she was the youngest participant (Russia)

10th International Competition for Young Pianists in Memory of Vladimir Horowitz “Horowitz-Debut” [14 and under], 1st Prize and Special Prize from the Ministry of Culture/ Categories A and D (Ukraine)