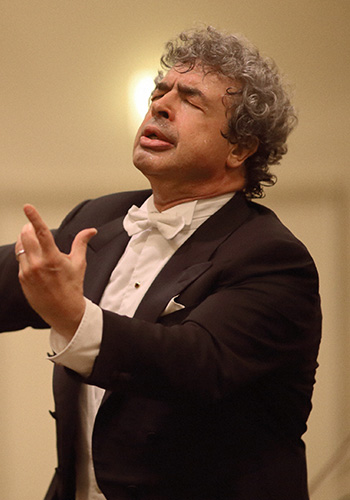 Music Director and Chief Conductor of the Czech Philharmonic, Semyon Bychkov was born in Leningrad in 1952, immigrated to the United States in 1975, and has been based in Europe since the mid-1980’s. In common with the Orchestra, Bychkov has one foot firmly in the cultures both of the East and the West.
Following his concerts with the Czech Philharmonic in 2013, Bychkov and the Orchestra devised The Tchaikovsky Project, a series of concerts, residencies and studio recordings which allowed them the luxury of exploring Tchaikovsky’s music together. The Tchaikovsky Project launched in autumn 2016 with Decca’s release of Symphony No. 6 coupled with the Romeo & Juliet Fantasy-Overture, and was followed a year later with the release of the Manfred Symphony. The Tchaikovsky Project culminates in autumn 2019 with the release of all Tchaikovsky’s symphonies, the three piano concertos, Romeo & Juliet, Serenade for Strings and Francesca da Rimini, followed by residencies with the Czech Philharmonic in Prague, Tokyo, Paris and Vienna.

In 1989, fourteen years after leaving the former Soviet Union, Bychkov returned to St Petersburg as the Philharmonic’s Principal Guest Conductor, the same year as he was named Music Director of the Orchestre de Paris. His international career had taken off several years earlier when a series of high-profile cancellations resulted in invitations to conduct the New York Philharmonic, Berlin Philharmonic and Royal Concertgebouw Orchestras. In 1997, he was appointed Chief Conductor of the WDR Symphony Orchestra Cologne, and the following year, Chief Conductor of the Dresden Semperoper.

Bychkov conducts the major orchestras and at the major opera houses in the US and Europe. In addition to his title with the Czech Philharmonic, he holds honorary titles with the BBC Symphony Orchestra, with whom he appears annually at the BBC Proms, and the Royal Academy of Music with whom the Czech Philharmonic will initiate a series of education initiatives from 2020. He was named “Conductor of the Year” at the 2015 International Opera Awards.

On the concert platform, the combination of innate musicality and rigorous Russian pedagogy has ensured that Bychkov’s performances are highly anticipated. With repertoire that spans four centuries, this season, in addition to his commitments to the Czech Philharmonic which include an extensive tour across Japan and concerts in Russia, China and Spain, Bychkov will conduct the Munich Philharmonic and the Royal Concertgebouw at home and in Germany, as well as performances of Strauss’s Elektra in Vienna and Wagner’s Tristan und Isolde in London.

Bychkov’s recording career began in 1986 when he was signed by Philips and began a significant collaboration which produced an extensive discography with the Berlin Philharmonic, Bavarian Radio, Royal Concertgebouw, Philharmonia Orchestra, London Philharmonic and Orchestre de Paris. Subsequently a series of benchmark recordings – the result of his 13-year collaboration (1997-2010) with WDR Symphony Orchestra Cologne ? include a complete cycle of Brahms Symphonies, and works by Strauss, Mahler, Shostakovich, Rachmaninov, Verdi, Detlev Glanert and York Höller. His recording of Wagner’s Lohengrin was voted BBC Music Magazine’s Record of the Year in 2010; and his recording of Schmidt’s Symphony No. 2 with the Vienna Philharmonic chosen as BBC Music Magazine’s Record of the Month.