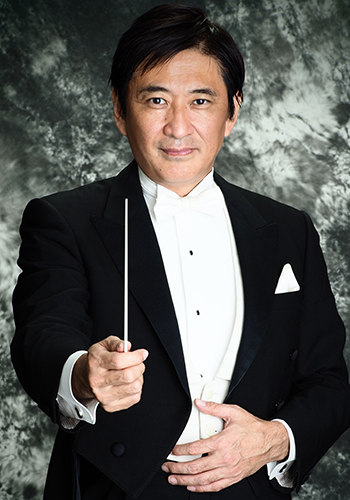 Born in Tokyo in 1962. He studied piano and violoncello, and was the last favorite student of
renowned conductor Akeo Watanabe. He served as assistant to Sir Georg Solti in London.

Fujioka graduated from the Department of Literature of Keio University. In 1990, following a
conducting internship with the Japan Philharmonic Orchestra, he enrolled in the conducting
department of the Royal Northern College of Music in Manchester. He was selected as a scholarship student, and in 1992 became the first recipient of the Sir Charles Groves Conducting Fellowship, which is awarded to the most talented young conductors.

Fujioka was Assistant Conductor of the BBC Philharmonic between 1992 and 1995. Following his very successful debut with the Japan Philharmonic Orchestra at the Suntory Hall in Tokyo in May 1995, he was appointed a regular guest conductor and now returns to work with the Orchestra on a number of occasions each season.

Following his debut with the BBC Philharmonic in November 1993, Sachio Fujioka has appeared with the Orchestra on many occasions including his debut at the BBC Proms in London in 1994 and he has also made a number of recordings with this Orchestra for Chandos Records.

Between 1995 and 2000 Sachio Fujioka was Principal Conductor of the Manchester Camerata and during the 1998/99 season he and the Orchestra undertook a highly successful tour of Japan including appearances at Suntory Hall, Tokyo. Maestro Fujioka served successively as conductor of the Japan Philharmonic Orchestra.

In 2001, Sachio Fujioka was appointed Principal Conductor of the Kansai Philharmonic Orchestra in Osaka. He is now in his 21st season as Principal, with which he has conducted over 40 concerts each year. The strong feeling of unity in these performances has thrilled audiences and earned high acclaim.

He has made a mark in opera as well. He conducted an Opera de Oviedo (Spain) production of Britten’s Turn of the Screw in 2006 which won an award for the year’s best new production; and production of Ariadne auf Naxos in 2009.

Fujioka has released 8 CDs with the BBC Philharmonic including the works of Japanese composer Takashi Yoshimatsu on the British label Chandos. He is currently recording the complete Sibelius symphonies with the Kansai Philharmonic Orchestra on ALM Records. His wide-ranging activities also include conducting the music for the NHK historical drama series “Kiyomori”.

He also appears in TV program “Enter the Music” since October 2014. (BS TV TOKYO every week on Saturday from 8:30)

Sachio Fujioka was the recipient of the 2002 Akeo Watanabe Foundation Music Award.