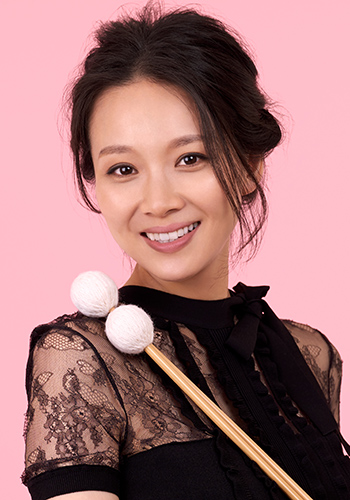 She has lived in Kumamoto, Japan, since she was two years old.

Ria began playing the marimba at the age of six.
She went to France when she was 18, and graduated with top honors from the Conservatoire Supérieur de Paris.

She also graduated at the top of her class from the soloist course at the Conservatoire de Strasbourg.

In 2003, she was awarded First Prize at the first Paris International Marimba Competition.

Since 2012, as a regular artist with the Kammeroper München, Ria has performed a wide range of operas in a new type of formation made up of chamber orchestra and marimba. Each year she appears in more than 50 performances throughout Europe, earning attention in every location.
Ria frequently performs with orchestras. She has made a number of appearances with the Berlin Symphony Orchestra in the Berliner Philharmonie Concert Hall. In Japan, she has performed with such orchestras as the Japan Philharmonic, New Japan Philharmonic, and Osaka Philharmonic. Ria is enthusiastic about premiering new compositions and performing commissioned works. In September 2014, she performed the highly successful world premiere of a marimba concerto written for her by Ohad Ben-Ari, in a concert with the Japan Philharmonic Orchestra conducted by Kazuki Yamada. In 2017, she performed the world premiere of a work by Dai Fujikura at the Huddersfield Contemporary Music Festival, with the performance broadcast on the BBC.

She is a guest professor at Heisei College of Music.

She resides in Berlin.