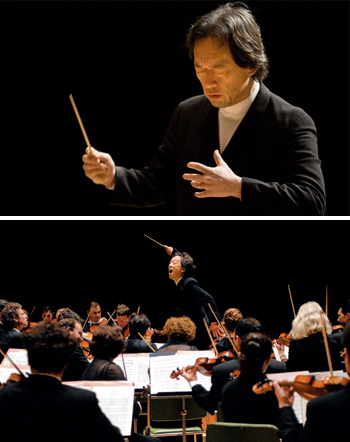 Heir of the first Philharmonic Orchestra founded in the 30’s by the French radio, the orchestra was re-established in the middle of the 1970’s at the instigation of Pierre Boulez, who criticized the rigidity of the traditional symphony orchestras.

The Orchestre Philharmonique de Radio France can therefore cover a vast repertoire from the 18th century up until our time, written for either a small ensemble or a large orchestra. Each group is formed according to the composition of the works, several groups working simultaneously.

The first music directors of the orchestra were composer Gilbert Amy and conductor Marek Janowski.
After more than 10 years at the head of the orchestra, Myung-Whun Chung is proud to have his orchestra considered as one of Europe’s most remarkable.

The greatest conductors have joined Myung-Whun Chung, enriching the orchestra such as Pierre Boulez, Esa-Pekka Salonen, Ton Koopman, or the most brilliant conductors of the new generation: Gustavo Dudamel, Alan Gilbert, Daniel Harding, Vassily Petrenko, Lionel Bringuier as well as Mikko Franck who will be the next Music Director of the orchestra from September 2015.
The Orchestre Philharmonique de Radio France is in residence at the Salle Pleyel. Pending the opening of a new auditorium at Radio France, set to 2013/2014, the orchestra also takes part to the Cité de la musique, the Châtelet and the Opéra Comique programming. All these concerts, broadcast on France Musique, are postcasted on the Radio France website. Every month, some are also available on video-streaming on the ArteLiveWeb and Radio France websites. The orchestra is present as well on the France Televisions, Arte and Mezzo TV antennas. Its recording activity remains steady and more than 300 references are now available on iTunes.
The orchestra musicians integrate themselves in schools and in hospitals to visit sick children. Beside Myung-Whun Chung, they have been ambassadors of UNICEF since 2007. They have also imagined a Philharmonic Academy in partnership with the Conservatoire de Paris.

The Orchestre Philharmonique created a website especially dedicated to the young audience (www.zikphil.fr). It enjoys the support of several partners, among which Amundi ranks as the orchestra’s principal patron since 2003.