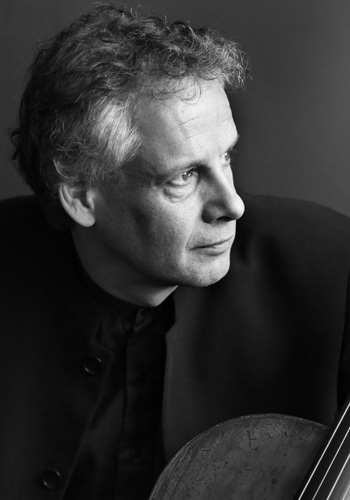 Pieter Wispelwey is equally at ease on the modern or period cello. His acute stylistic awareness, combined with a truly original interpretation and a phenomenal technical mastery, has won the hearts of critics and public alike in repertoire ranging from JS Bach to Schnittke, Elliott Carter and works composed for him.

Highlights of the 16-17 season include a play-direct project with the Sydney Symphony Orchestra, a performance of the complete Bach suites at Auditorium de Lyon and the City Recital Hall in Sydney, performances of Tavener’s Svyati with the Flanders Radio Choir and two recitals at King’s Place in London as part of their ‘Cello Unwrapped’ season. Pieter will also give series of extraordinary recitals at the Melbourne Recital Centre as part their Great Performer Series, where he will perform the complete Bach Suites, Beethoven’s complete works for cello and piano, and the two cello sonatas by Brahms over the course of three consecutive evenings.

Pieter Wispelwey enjoys chamber music collaborations and regular duo partners include pianists Cédric Tiberghien and Alasdair Beatson and he appears as a guest artist with a number of string quartets including the Australian String Quartet.

In 2012 Wispelwey celebrated his 50th birthday by embarking on a project showcasing the Bach Cello Suites. He recorded the complete Suites for the third time, released on the label ‘Evil Penguin Classics’. The box set also includes a DVD featuring illustrated debates on the interpretation of the Bach Suites with eminent Bach scholars Laurence Dreyfus and John Butt. A major strand of his recital performances is his performances of the complete suites during the course of one evening, an accomplishment that has attracted major critical acclaim throughout Europe and the US. “On paper it is a feat requiring brilliance, stamina and perhaps a bit of hubris. In practice Mr. Wispelwey proved himself impressively up to the challenge, offering performances as eloquent as they were provocative” ( New York Times).

Pieter Wispelwey’s impressive discography of over 20 albums, available on Channel Classic, Onyx and Evil Penguin Classics, has attracted major international awards. His most recent concerto release features the C.P.E. Bach’s Cello Concerto in A major with the Musikkollegium Winterthur, whilst he is also midway through an imaginative project to record the complete duo repertoire of Schubert and Brahms. Other recent releases include Lalo’s Cello Concerto, Saint-Saen’s Concerto no.2 and the Britten Cello Symphony with Seikyo Kim and the Flanders Symphony Orchestra, Walton’s Cello Concerto (Sydney Symphony/Jeffrey Tate), Prokofiev’s Symphonie Concertante (Rotterdam Philharmonic/Vassily Sinaisky.

Born in Haarlem, The Netherlands, Wispelwey’ studied with Dicky Boeke and Anner Bylsma in Amsterdam and later with Paul Katz in the USA and William Pleeth in the UK.
Pieter Wispelwey plays on a 1760 Giovanni Battista Guadagnini cello and a 1710 Rombouts baroque cello.