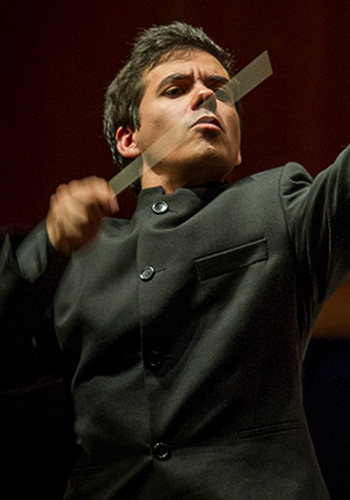 Young Portuguese conductor Nuno Coelho is the winner of the 12th Cadaqués International Conducting Competition in Barcelona. As a result of this success he will perform with over thirty orchestras in Europe, Japan and South America during the next three seasons.

Prior to this Coelho had already won several awards such as the 1st Prize at the Portuguese Radio Conducting Competition as well as being a finalist at the Nestlé and Salzburg Festival Young Conductors Award in 2017. Following on these competitions he has made his debut with the Orquestra de Cadaqués, Orquestra Gulbenkian, Orquestra Sinfónica Portuguesa, Camerata Salzburg and Kammerorchester Basel.

For the past two years he served as assistant conductor of the Nederlands Philharmonisch Orkest where he worked with Marc Albrecht on symphonic concerts, as well as at the Dutch National Opera. During both seasons he conducted the orchestra in concerts at the Concertgebouw in Amsterdam and at numerous venues throughout the Netherlands.

This season Nuno Coelho returns to the Nederlands Philharmonisch Orkest at the Robeco Festival in Concertgebouw and to the Nederlands Kamerorkest for a production of Grigori Frid’s “Das Tagebuch der Anne Frank”. In Portugal he continues his collaboration with the Orquestra Gulbenkian conducting three programs in Lisbon and a small tour in Algarve. He returns as well to the Orquestra Sinfónica Portuguesa for a new ballet production together with the Companhia Nacional de Bailado. He makes his debuts with the Basel Sinfonieorchester at the Ballett Theater Basel and the Orquestra Clássica da Madeira.

In summer 2016 he attended the Tanglewood Music Center as one of the Conducting Fellows and was invited to return in 2017. There he worked and performed with the Festival Orchestra and assisted the guest conductors such as Andris Nelsons, Christoph von Dohnányi, Charles Dutoit, Thomas Adès and Stéphane Denève.

A passionate opera conductor, he has conducted performances of “Die sieben todsünden” in Tanglewood, “La Traviata” in Teplice as well as “Cavalleria Rusticana” in Plzen, Czech Republic, where he returns next season for “Rusalka”.

He studies at the Zürcher Hochschule der Künste with Johannes Schlaefli and took part in masterclasses with Bernard Haitink, Esa-Pekka Salonen, Neeme Järvi and Gennady Rozhdestvensky. In 2015 he was admitted into the German Music Council’s prestigious Dirigentenforum and received a scholarship from the Calouste Gulbenkian Foundation from 2014 to 2016.

Born in 1989, Nuno Coelho completed his violin studies in Klagenfurt and Brussels with Yuzuko Horigome, working regularly with professional orchestras and ensembles. As a soloist, he has appeared with the Kärtner Sinfonieorchester, the Jeugd&Muziek Antwerpen and for several occasions with the Kammerakademie Klagenfurt.