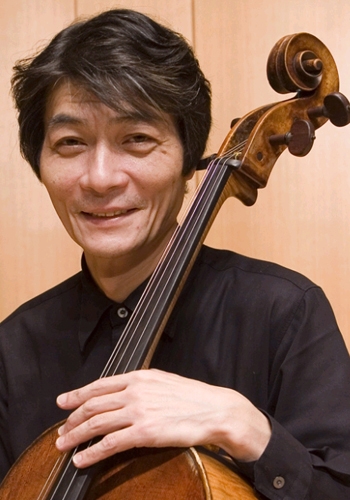 Graduated from the Kyoto Municipal Arts University in 1975. He won the 23 Bunka Broadcasting Music Award in 1976. In 1977, he received the 2nd Tokyo Municipal Arts New Face Award, and the 1st prize in 46th Japan Music Concours, and he received the Overseas Dispatch Concours Matsushita Award.
In 1979, he gave debut recitals in Kyoto and Tokyo. He studied under Professor Howard Shapiro at Julliard School of Music. He took first place in the 6th Gaspar Cassado International Violoncello Competition (Italy).
After studying under the great Pierre Fellnia in Geneva, he was active in joint concerts with orchestras in Switzerland, Italy, and France and with chamber orchestras. He returned home to Japan in 1981, and initiated full-fledged activities in Japan, including recitals, concertos, and chamber music performances. In 1983, he received the 1st Kyoto Prefecture Cultural New Face Award. In 1986, he made it recording debut of the Franck Cello Sonata (RVC) with Waon Shimizu on the piano. He held a series of recitals of the complete Back unaccompanied cello sonatas in Tokyo and Kyoto. In 1990, he appears as soloist with the Vienna Kammer Phil on their Japan tour. In 1991, he did a joint concert with the Czech Philharmonia Orchestra under the baton of Neueman of the Dvorak Cello Concerto. In 1992, he release a CD album of the Bach unaccompanied cello sonatas (Fontec). In 1993, he received the encouragement award at the 5th Hida Furukawa-Cho Music Grand Prix. He performed the Dvorak Cello Concerto in a joint concert with the Prague Symphony Orchestra. In 1994, he released a CD (Fontec) of the Dvorak and Schumann cello concertos with the Shin Nihon Phil under the baton of Tetsuji Honna.
In 1995, he released a CD “No Title” of short cello pieces with Jan Banenka on the piano. In November 1997, he released a CD of the Brahms Cello Sonata (Fontec). In 1998, he received the ABC International Music Award, and in the same year, he organized a string quartet (with Taiji Toshima and Tatsuya Yabe on the violin, and Kawamoto Yoshiko on the viola) in celebration of the tenth anniversary of the Kyoto Prefecture Citizens Hall Alti, and initiated a series of regular concerts. In 2001, he received the accomplishment prize in the 19th Kyoto Prefecture Cultural Awards.
In the meantime, he has received invitations to give joint concerts with practically all of the major orchestr in Japan, including the NHK Symphony Orchestra. He has also given recitals throughout Japan, and in the field of chamber music, he has given joint performances with violinist Joseph Suk, pianist Jan Banenka, clarinetist Peter Mumidol, as well as the Melos String Quartet and the Tokyo Quartet, as a result of which, his broad ranging activities have gained for him the trust and respect of musicians both at home and abroad both as a soloist and in the field of chamber music.
At present, he serve as professor at his alma mater the Kyoto Municipal Arts University, and he nurtures the artists of the generation to come as special guest professor at the Toho Gakuen University.
Read more