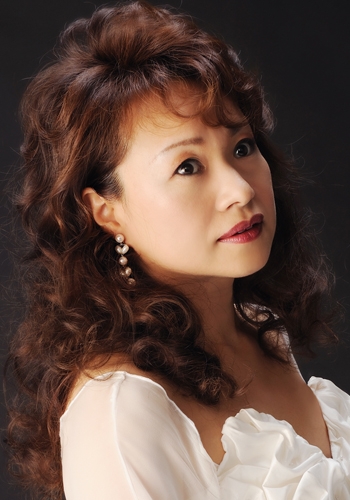 Mieko Sato graduated from the Musashino Academy of Music in Tokyo. After completing the 9th training course for opera singers at the Japan Opera Foundation, she went to Italy to continue her opera studies. While studying in Italy she was awarded the 7th Goto Memorial Culture Award for new opera singers in 1996. She extended her studies in Italy for two years from 1997 on a scholarship from the Goto Memorial Culture Foundation.

In 1998 Sato received international attention as the first Japanese to win 1st Prize in the voice division of the 11th International Tchaikovsky Competition. Among other prizes at competitions in Japan and abroad, she won three prizes (1st Prize in the voice division, the Masuzawa Prize and the Study Abroad Special Prize) at the 64th Japan Music Competition.

Mieko Sato made her opera debut in 1995, performing Gilda in “Rigoletto” in Rome, Italy. She has since appeared in many operas in Japan and other countries. In 1999, she made her debut as Micaela in “Carmen” at the New National Theatre, Tokyo. In 2000 she earned high praise for her debut in the title role of “Lucia di Lammermoor” with the Fujiwara Opera. In 2003 she was invited to appear in leading roles in “Lucia di Lammermoor” and “Rigoletto” at the Sofia National Opera in Bulgaria, and received high acclaim for her performances. In the same year, a highlights version of Sato’s specialty, “Lucia di Lammermoor,” was created for her under the title “Lucia in Fantasy” (directed by Tatsuji Iwata) and premiered in Aichi, Japan. Since then, the unique production has been presented in locations around Japan, always attracting much attention.

In addition to operas, Sato has performed in many recitals and a wide range of concerts including Mahler’s Symphony No. 2 “Auferstehung” with the Philharmonia Orchestra conducted by Eliahu Inbal, and Orff’s “Carmina Burana.” In 2009 she performed the title role in a concert version of “Iolanta” (with the Tchaikovsky Symphony Orchestra of Moscow Radio conducted by Vladimir Fedoseyev), moving listeners with the emotional richness of her expression and receiving high acclaim.

Sato performed the title role in “Lucia di Lammermoor” with the Fujiwara Opera in Tokyo in March 2011 and in a production of the opera by the Aichi Arts Foundation in Nagoya in September 2012. In February-March 2015, she performed the role of Konstanze in Mozart’s “Die Entführung aus dem Serail,” the 6th opera project produced by Ken Nishikiori. She received high praise for all of these performances. In recent years she has taken on new roles including Norina in “Don Pasquale,” Poulenc’s “La Voix Humaine,” Mimi in “La Bohème,” Shunkin in “A Portrait of Shunkin,” and Tsu in “Yuzuru.” Her performances in all of these roles have been acclaimed as well, adding to her brilliant successes as one of Japan’s most renowned opera singers.

Mieko Sato is a rofessor at Musashino Academy of Music, a visiting professor at Oita Prefectural College of Arts and Culture, and a member of the Fujiwara Opera Company.