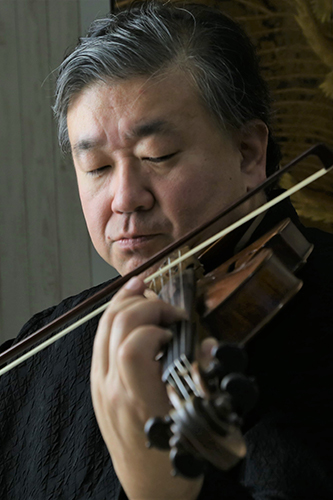 Masayuki Kino was apprenticed by Aiji Hibino at the age of four to start learning the violin after which he joined The Music School for Children at Toho Gakuen School of Music to study under Isako Shinozaki. He also studied under Juzo Nishikawa. In 1977, he received first prize for the Junior High School division of the 33rd Japan Music Competition for Students and was admitted into the Toho Gakuen Music High School in 1979.
In 1980, Kino received an award at the 43rd Music Competition of Japan after which he moved to the U.K in 1982 to study at the Guildhall School of Music & Drama under Professor Yfrah Neaman with multiple scholarships; one from the school and the other from the Myra Hess Trust. Following his graduation, he studied under maestros; Nathan Milstein, Ruggiero Ricci and Ivry Gitlis.
In 1983, Kino won first prize at the Rodolfo Lipizer International Violin Competition with the unanimous agreement from the competition judges. The following year, he received top prize at the Carl Flesch International Violin Competition in London together with an Audience Award and the W.H.Smith prize – an accomplishment that earned his reputation in the music industry of U.K. In Paris 1985, he went on to receive the award for exceptional salon music at the Yehudi Menuhin International Competition. Two years later, Kino gave a commemorative concert in London after receiving the Royal Orchestra Society’s Silver Medal – an honor given to concerto soloists with potential talent.
In 1988, Kino received the top award at the Ruggiero Ricci International Masters Competition held in Berlin after which he became first again at the Palm Beach Invitational Violin Competition held in the states in 1990.
Since beginning his career in 1984, Kino has performed in Japan, Europe, U.S.A, SouthEast Asia and the Middle East with an outstanding concerto repertoire of up to 40 pieces. Throughout his career, he has performed with many orchestras such as the Royal Philharmonic Orchestra, the Berliner Sinfonieorchestra, the London Mozart Players, the Polish National Radio Symphony Orchestra, Oxford Proms Orchestra, the Greater Palm Beach Symphony Orchestra, the Orchestra Sinfonica dell Opera Ljubljana, the Moscow Radio Symphony Orchestra, the Romania National George Enesco Symphony Orchestra, and the Japan Philharmonic Symphony Orchestra. He has also taken part in international music festivals such as Sanremo, Aldeburgh, Greenbelt, Interlink, Atelforum and Oulunsalo. Also in 2003 at The Music Festival in the city of Cassis, France, Kino performed with Ivry Gitlis, Ruggiero Ricci and Martha Algerich. Hismedia appearances include both radio and television programmers of BBC, Radio France,
RAI (Italy) and RTSI (Switzerland). In 1994, the Tokyo performance of a recital tour with the great pianist Joseph Seiger (famous for his works with violin maestro Mischa Elman) was broadcasted on NHK television. The same year, The 2nd Stradivarius Summit Concert – an event involving eight Stadivari violins, and many internationally renown performers such as Ivry Gitlis and Masafumi Hori – was also taken up by NHK.
In 1998, Kino also performed with Gitlis in France and Spain – concerts that were broadcasted in both countries. The Paganini Concert in 2001 was broadcasted on the live broadband site of Television Asahi.
Kino has released a number of CD’s and DVD’s from various record labels suh as Octavia Records Inc, and Sound & Music Creation. Of these, his recording of Paganini’s 25th Caprice “Caprice d’adieu” (or the Farewell Caprice) in 2003, was prominently marked as the first public performance of the piece in Japan.
After many performances as the concertmaster for the Nagoya Philharmonic Orchestra, he joined the Japan Philharmonic Orchestra as concertmaster in 1993 after which he became Solo-concertmaster of the same orchestra in 2002.
He has taught many young musicians at the Toho Gakuen School of Music and Musashino Academia Musicae as well as becoming a professor at the Tokyo College of Music in 2013.
Kino currently plays the Lorenzo Storioni violin made in 1776 – an honorary gift from his tutor, Ruggiero Ricci.
(June 2020)