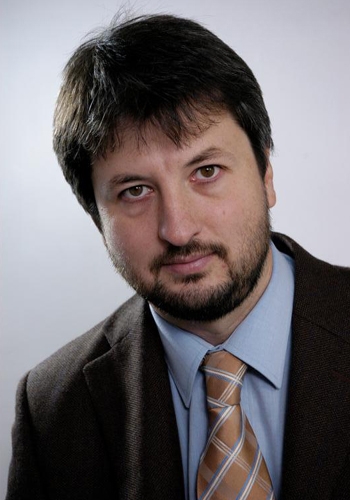 Born in 1969 in Carlsbad, The Czech Republic, Jiri Strunc initially studied violin at Pilsen Conservatory and later graduated as a conductor from the Academy of Performing Arts in Prague in 1995. He gained his experience in 1993 when studying at The Guildhall School of Music in London and subsequently as a participant in masterclasses with prof. H. Rilling in the years 1992( Czech Republic) and 1993 ( Czech Republic, Germany, USA).

He came to prominence in 1995 when he won The City of Prague Prize for the Best Candidate form The Czech Republic in The Prague Spring International Music Competition as well as The Gideon Klein Foundation Prize and The Rafael Schächter Memorial Prize.

After the first engagements with the Prague Youth Orchestra and later the Carlsbad Symphonic Orchestra Jiri Strunc was appointed Chief Conductor of the Pilsen Opera ( J.K.Tyl Theatre) in 1997. Since than he has performed a great number of famous opera works ( Mefistofeles, Rusalka, Kate and the Devil,Werther, Cossi fan tutte, Don Giovanni, Boris Godunov, Samson a Dalila, Eugene Onegin, The Flying Dutchman, Undine, La forza el destino and others) and has built a strong reputation in both opera and symphonic repertoire.
As a guest conductor he appears frequently with leading Czech orchestras such as The Prague Philharmonia Chamber Orchestra, The Prague Philharmonic Choir, The Carlsbad Symphonic Orchestra as well as with many well- known soloists.

When guest conducting he also made in 2003 a tremendous success with a new music interpretation of Madama Butterfly at The Prague State Opera and from season 2006-2007 he became Conductor at this famous theatre. At Pilsen Opera he is going to perform Manon Lescaut this year.

For his outstanding performance of Smetana´s opera Prodana nevesta ( The Bartered Bride) in 2002 was Jiri Strunc awarded “Libuska Award”.

He made his debut in Japan in 2003 as Chief Conductor during the Pilsen Opera tour of Japan where he performed La traviata, Madama Butterfly and The Bartered Bride and re-visited following year with Il trovatore and Carmen. Since then Jiri Strunc makes regular performances with Gunma Symphony Orchestra in Japan.

Jiri Struns has made several recordings and also records for Czech Radio Station.