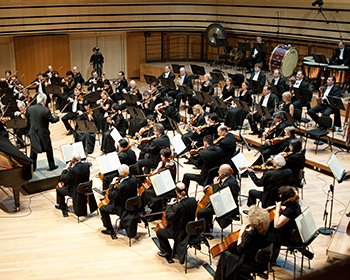 The Hungarian National Philharmonic Orchestra has been one of Hungary’s leading symphony orchestras for over ninety years.

The era marked by the name of János Ferencsik and Kobayashi Ken-Ichiro was followed by a new chapter in the history of the orchestra when in 1997 Zoltán Kocsis became general music director. In almost two decades the orchestra underwent renewal and – with versatility befitting a national symphony orchestra – it performs not only classical pieces, but also numerous other important works previously missing from the repertoire, including Hungarian music of the recent past and our days, and popular chamber music concerts and events for young people. The Hungarian National Philharmonic Orchestra has performed the works of Richard Strauss, Debussy, Schoenberg, Ravel and Rachmaninov in some ambitious, void-filling projects, and importantly it also promotes the cause of 20th and 21st-century contemporary Hungarian music.

Despite its size, the orchestra actually functions more like a chamber orchestra in terms of the sensitivity with which its members listen to, and work in tandem with, one another. The musicians are allowed to shine, yet still share responsibility for the collective. They also share the aim of achieving and delivering the highest level of quality at every performance, an ambition that goes far beyond simply playing all the notes perfectly.

After the death of Zoltán Kocsis, the Ferenc Liszt Award-winning Zsolt Hamar held the post of Musical Director at the Hungarian National Philharmonic from March 2017 to August 2020. He previously worked with the orchestra as its first permanent conductor and built up an impressive international career.

The oeuvre of Bartók features prominently in the repertoire of the Hungarian National Philharmonic Orchestra, with many authoritative interpretations recorded in the Bartók New CD Series. Its subscription concerts feature world-famous guest soloists and conductors, as well as highly gifted young Hungarian musicians. The orchestra has appeared in the greatest venues and festivals around the world, including Avery Fisher Hall in New York, Suntory Hall in Tokyo, Birmingham’s Symphony Hall, the Megaron in Athens, the Bozar Centre in Brussels, Francfort’s Alte Oper, the Enescu Festival in Romania, as well as the Colmar and Canary Islands Festivals. In the past 15 years the orchestra has given over 350 concerts in some 40 countries, and is a returning guest in France, Japan, Germany, Romania, Spain, Slovakia and Slovenia.