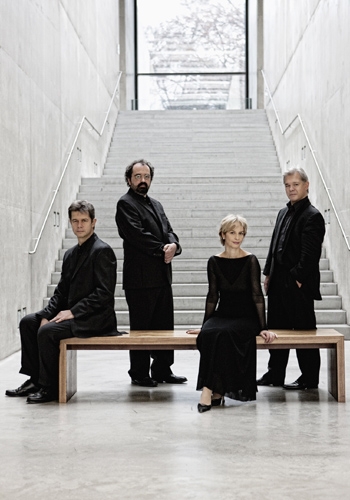 ‘A grandiose summation – what is undoubtedly the world’s most famous quartet […] celebrates its thirtieth birthday’: so wrote the Neue Zuricher Zeitung at the opening of the 2011/12 season.

The Hagen Quartet celebrates its anniversary with the issue on its new label myrios classics of a brand-new recording of works by Mozart, Webern and Beethoven which has already been highly acclaimed by the international press. On this release, said the leading German magazine FonoForum, the ‘world-class ensemble […], now in its thirtieth year of existence, has advanced still further’ in musical and interpretative terms. ‘Its new vision is breathtaking, and can become addictive. […] The richness of colours and emotions is spellbinding.’

As it observes this significant birthday, the quartet remains as lively as ever. New proof of this comes with its selection in October 2011 for the prestigious ECHO Klassik award as Ensemble of the Year 2011.

The unprecedented three-decade career of the Hagen Quartet began in 1981. Its early years, marked by a series of prizes in chamber-music competitions and an exclusive recording contract with Deutsche Grammophon that was to produce around forty-five CDs over the following twenty years, enabled the group to work its way through the virtually unlimited quartet repertoire from which the distinctive profile of the Hagens has emerged.

Collaborations with artistic personalities such as Nikolaus Harnoncourt and Gyo?rgy Kurta?g are as important to the Hagen Quartet as its concert appearances with performers like Maurizio Pollini, Mitsuko Uchida, Krystian Zimerman, Heinrich Schiff, and Jorg Widmann.

The group’s concert repertoire and discography features attractive and intelligently arranged programmes which embrace the whole history of the string quartet, from its beginnings before Haydn right through to Kurta?g. The Hagen Quartet keeps in close touch with composers of its own generation, whether by reviving existing works or by commissioning and premiering new pieces.

For a multitude of young string quartets, the Hagen Quartet is a model in terms of sound quality, stylistic plurality, ensemble playing, and serious commitment to the works and composers of its chosen genre.

As teachers and mentors at the Salzburg Mozarteum and the Hochschule in Basel and in international masterclasses, the quartet’s members pass on their wealth of experience to their younger colleagues.

The next season, 2012/13, will be entirely devoted to complete Beethoven cycles, with performances of all the composer’s string quartets in the world’s largest and most important musical centres (New York, Tokyo, Paris, London, Vienna, Salzburg).