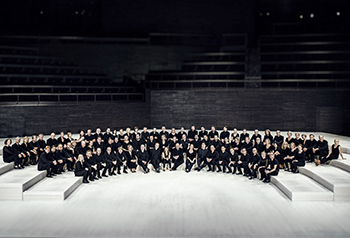 “The Finnish Radio Symphony Orchestra is a splendid body indeed: scrupulous in ensemble, refined in tone, almost aristocratic.” (The Times)

The Finnish Radio Symphony Orchestra (FRSO) is the orchestra of the Finnish Broadcasting Company (Yle). Its mission is to produce and promote Finnish musical culture. Its Chief Conductor as of autumn 2013 is Hannu Lintu.

The latest contemporary music is a major item in the repertoire of the FRSO, which each year premieres a number of Yle commissions. Another of the orchestra’s tasks is to record all Finnish orchestral music for the Yle archive. During the 2015/2016 season it will premiere six works commissioned by Yle.

The 2015/2016 season will be a feast of music played by great pianists. Murray Perahia, who last performed in Finland eight years ago, will now make his debut appearance at the Helsinki Music Centre. Brazilian Nelson Freire, another star pianist and one who seldom appears in concert, will be giving his first performance with the FRSO. Our audiences will have a rare chance to compare these two great keyboard masters, since both will be playing Beethoven’s Fourth Piano Concerto. Legendary András Schiff, a pianist who has appeared with the FRSO a number of times before, will both conduct and play Concertos by Mozart and Haydn. Other superb pianists engaged as soloists with the FRSO include Jeremy Denk, Steven Osbourne, Stephen Hough and Olli Mustonen. The list of guest conductors includes David Zinman, until recently for many years skipper of the Tonhalle Orchestra in Zurich, Tugan Sokhiev, Music Director of the Bolshoi Theatre, and Manfred Honeck, Music Director of the Pittsburgh Symphony Orchestra. Baroque genius Fabio Biondi will both conduct the orchestra and play his Guarneri violin. Of the vocalists starring with the FRSO, Swedish mezzo icon Anne Sofie von Otter will be singing Sibelius songs orchestrated by Aulis Sallinen. Karita Mattila can be heard in a programme of Saariaho and Sibelius’s Luonnotar, and at the Helsinki Festival singing Marie in Alban Berg’s Wozzeck. Soile Isokoski is one of the soloists in Mendelssohn’s Elijah, and the highly-acclaimed Lithuanian Wagner soprano Violeta Urmana will sing the final scene from Götterdämmerung.

The FRSO has recorded works by Ligeti, Eötvös, Nielsen, Hakola, Lindberg, Saariaho, Salonen, Sallinen and others, and the debut disc of the opera Aslak Hetta by Armas Launis. Its discs have reaped some major distinctions, such as the BBC Music Magazine Award and the Académie Charles Cros Award. The disc of the Sibelius and Lindberg Violin Concertos (Sony BMG) with Lisa Batiashvili as the soloist received the MIDEM Classical Award in 2008, in which year the New York Times chose the other Lindberg disc as its Record of the Year. The recording of Ligeti’s Violin Concerto was Editor’s Choice in the Gramophone in February 2014.

All the FRSO concerts both in Finland and abroad are broadcast, usually live, on Yle Radio 1. They can also be heard and watched with excellent live stream quality on the FRSO website (yle.fi/rso).