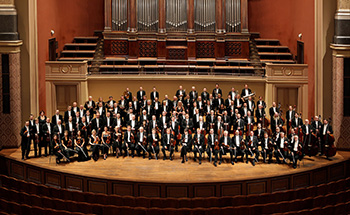 The 124 year-old Czech Philharmonic gave its first concert ? an all Dvořák programme conducted by the composer himself – in the famed Rudolfinum Hall on 4 January 1896. Acknowledged for its definitive interpretations of Czech composers, the Orchestra is also recognised for the special relationship it has to the music of Brahms, Tchaikovsky and Mahler, who conducted the world première of his Symphony No. 7 with the Orchestra in 1908.
The Czech Philharmonic’s extraordinary and proud history reflects both its location at the very heart of Europe and the Czech Republic’s turbulent political history, for which Smetana’s Má vlast (My Homeland) has become a potent symbol. In 1945, Chief Conductor Rafael Kubelík conducted the work as a ‘concert of thanks’ for the newly liberated Czechoslovakia and 45 years later, Má vlast was Kubelík’s choice to mark Czechoslovakia’s first free elections. For the opening subscription concert of the 2019/20 season, Chief Conductor and Music Director Semyon Bychkov will conduct Má vlast with the Czech Philharmonic for the first time.

Bychkov’s and the Czech Philharmonic’s second season together also sees the culmination of their The Tchaikovsky Project which includes the boxset release on Decca Classics followed by residencies in Prague, Tokyo, Vienna and Paris. Elsewhere in the season, they travel to Taiwan, Russia, China and Spain, as well as giving concerts at home including the Czech première of Glanert’s Requiem fur Hieronymus Bosch alongside performances of works by Berio, Dutilleux, Martinů, Brahms, Shostakovich, Beethoven and Mahler.

Throughout the Czech Philharmonic’s history, two features have remained at its core: its championing of Czech composers and its belief in music’s power to change lives. As early as the 1920’s, Václav Talich (Chief Conductor 1919-1941) pioneered concerts for workers, young people and other voluntary organisations including the Red Cross, the Czechoslovak Sokol and the Union of Slavic Women and, in 1923 gave three benefit concerts for Russian, Austrian and German players including members of the Vienna and Berlin Philharmonic Orchestras.

The philosophy continues today, and is equally vibrant. A comprehensive education strategy engages with more than 400 schools bringing all ages to the Rudolfinum ? some travelling as many as four hours – to hear concerts and participate in masterclasses. An inspirational music and song programme led by singer Ida Kelarová for the extensive Romany communities within the Czech Republic and Slovakia has helped many socially excluded families to find a voice. From 2020, the Orchestra will embark on a series of ongoing education exchanges in the UK with the Royal Academy of Music and in China with the Jiangsu Centre for the Performing Arts, Nanking.

An early champion of the music of Martinů and Janáček, the works of Czech composers, both established and new, remain the lifeblood of the Orchestra. In collaboration with Semyon Bychkov, nine Czech composers have been commissioned to write works for the Orchestra alongside five international composers – Detlev Glanert, Julian Anderson, Thomas Larcher, Bryce Dessner and Thierry Escaich – to be premièred over the forthcoming seasons; the Orchestra additionally holds an annual young composers’ competition first initiated by the late Jiří Bělohlávek (Chief Conductor 2012-2017) in 2014.