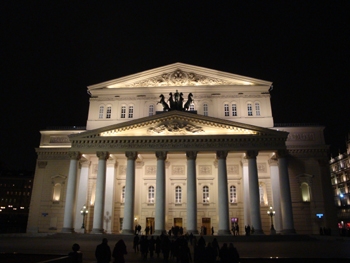 The history of the Bolshoi Theatre begins in 1776 when the first permanent theatre company in Moscow was established by the city’s Public Prosecutor and theatre-lover Peter Urussov, together with an Englishman an ex-acrobat named Michael Maddox. In 1780 the company acquired its own theatre in Petrovsky Street but twenty-five years later the building was razed to the ground in one of the fires which were a common event in the Moscow of this period.
In January 1825 the new Bolshoi Petrovsky Theatre was opened. Designed in classical style, the building was fronted by eight Doric columns and its portico surmounted by a bronze Apollo driving his four-horse chariot. The Bolshoi Petrovsky devoted itself to the production of opera and ballet only. In 1853 fire again destroyed the interior of the theatre, and the building was restored by the Venetian architect Alberto Cavos.
During the 1840’s, the Bolshoi Theatre staged the first productions of Glinka’s operas Ivan Susanin and Ruslan and Ludmila, works which marked the foundation of a truly national school of composition in Russia. Of equal importance to the history of both ballet and opera was the legacy of Pyotr Tchaikovsky, many of whose works received their first performance at the theatre. These include Evgeny Onegin, The Queen of Spades and Swan Lake.
The turn of the century was also a period of greatness for opera at the Bolshoi Theatre. Artists performing there included Leonid Sobinov, perhaps the finest interpreter ever of the role of Lensky in Evgeny Onegin, the soprano Antonina Nezhdanova, the contralto Evgenia Zbruyeva, and the legendary bass Fedor Chaliapin. Chaliapin joined the company in 1899 and remained associated with the theatre until 1920. Such was his remarkable influence and popularity at the Bolshoi that the repertoire to be performed was often chosen specifically to showcase his unique talent. Boris Godunov and Serov’s Judith were revived, together with Rimsky-Korsakov’s The Maid of Pskov and Mozart and Salieri and, at Chaliapin’s insistence, a number of contemporary Russian operas were staged. Other composers whose operas received first performances at the Bolshoi at this time included Anton Arensky and his pupil, Sergei Rachmaninov, who also appeared at the theatre as conductor.
Following the October Revolution in 1917, Moscow became the capital of the new Soviet Union, and debate raged as to the function of the arts within a Socialist society. Left-wing critics demanded the removal from the repertoire of works by bourgeois composers such as Tchaikovsky and Rimsky-Korsakov. However, more moderate voices prevailed and, during the early Soviet period, traditional nineteenth-century operas and ballets were performed alongside contemporary works. In the 1920’s the Corporation of Solo Artists of the Bolshoi Theatre under its Music Director Nikolai Golovanov, gave free concerts for workers and soldiers, and these enjoyed enormous popularity. Operas premiered at this time included Virgin Soil Upturned by Ivan Dzerzhinsky, and, on 14 June 1927, the first Moscow production of Prokofiev’s The Love for Three Oranges.
The immediate post-war period produced another group of outstanding singers in Russia, all of whom made regular appearances on the Bolshoi stage. These included tenors Ivan Kozlovsky, Sergei Lemeshev and Georgi Nelepp, basses Ivan Petrov, Alexander Pirogov and Mark Reining, mezzo soprano Irina Arkhipova and soprano Galina Vishnevskaya. The theatre’s chief stage director was Boris Pokrovsky, who did much to modernize operatic stage production. New operas by living composers continued to be produced alongside the standard repertoire.

As well as the glories of its singers, The Bolshoi Theatre also boasts an orchestra worthy to be compared with any of the world’s great symphony orchestras. Throughout its long history it has been directed by some of Russia’s greatest conductors, including Nikolai Golovanov, Yury Faier, Alexander Melik-Pashayev, Boris Khaikin, Evgeny Svetlanov, Gennadi Rozhdestvensky, Mstislav Rostropovich and Mark Ermler. Music Director and Chief Conductor Alexander Vedernikov took his position in 2001.

Since then The Bolshoi Theatre has proved to be able to tackle various artistic tasks and to achieve successful results. A number of classical repertoire operas were staged: Khovanshchina by Musorgsky, Snow Maiden by Rimsky-Korsakov, Ruslan and Ludmila by Glinka, Mazeppa by Tchaikovsky, Adriana Lecouvreur by Cilea, La forza del destino and Macbeth by Verdi, Der Fliegende Hollander by Wagner, Madama Butterfly by Puccini and The Magic Flute by Mozart. At the beginning of the XXI century the Theatre started to include in its repertoire masterpieces of the XX century Russian composers. For the last years The Bolshoi Theatre has presented to the audience The Gambler, The Fiery Angel and War and Peace by Prokofiev, The Lady Macbeth of Mtsensk by Shostakovich. In 2005, the Bolshoi Theatre presented a new production of “The Children of Rosenthal”, an opera composed by Leonid Desyatnikov upon the Bolshoi’s order.
Among the directors, whose productions have successfully become part of the Bolshoi repertoire, there are top-level Europeans masters Peter Konvichny, Robert Wilson, Graham Vick, as well as outstanding theatre directors of Russia Temur Chkheidze, Robert Sturua, Dmitry Chernyakov, Eimuntas Nekrosius.
The Bolshoi Theatre realized a number of educating projects, a Moscow premiere of Songs of Gurre by A. Schoenberg, a concert performance of Berlioz’s The Damnation of Faust, as well as concert programs of Berg’s and Richard Strauss’s music included. Outstanding soloists and ensembles appeared in chamber music concerts held in The Bolshoi on a regular basis. The revived concerts of The Bolshoi Theatre Symphony Orchestra on the new stage and the stage of the Moscow Conservatoire Big Hall enjoy great popularity both with the public and critics.
It is hard to underestimate the success of the Bolshoi Ballet in Paris, London, USA, Japan, South Korea, orchestra and choir artists in Spain and Portugal, opera in Ljubljana, Warsaw and Riga. The Theatre managed to restore fruitful partnership relations with Opera Nationale de Paris, Teatro alla Scala, Covent Garden, Polish and Latvian National Operas, Maggio Musicale Fiorentino Festival. The opera Der Fliegende Hollander for the first time in Russian history has been created in collaboration with one of the major European theaters ? Bayerische Staatsoper.