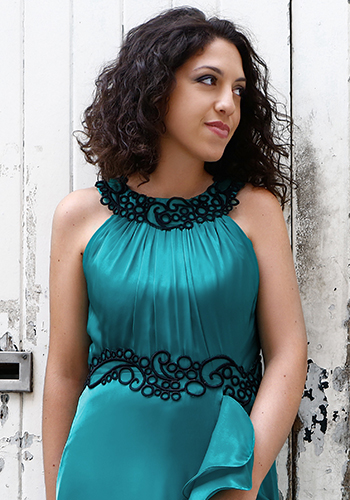 “Beatrice possesses an old soul that belies her twenty years, and more than a touch of genius” Gramophone, January 2014

The year 2017 will remain as a milestone in her career with the release of Bach’s Goldberg Variations on Warner classics, The recording was praised by reviewers worldwide and was crowned by two major awards: “Young Artist of the Year” Gramophone Classical Music Award and “Discovery of the year” Edison award.

During the 2017/18 season, Beatrice Rana plays recitals at Amsterdam’s Concertgebouw as part of the Piano Masters Series, Cologne’s Philharmonie, Lucerne Piano Festival, Lisbon’s Gulbenkian Great Performers series and Toronto’s Koerner Hall, tours with Antonio Pappano and Orchestra dell’Accademia Nazionale di Santa Cecilia., performs with Yuri Temirkanov and the St. Petersburg Philharmonic, Emmanuel Krivine and the Orchestre National de France, Osmo Vänska and the Helsinki Philharmonic, Sir Roger Norrington and the Camerata Salzburg and returns to the London Philharmonic at the Royal Festival Hall with Mikhail Jurowski. In Summer 2017, Beatrice made notable debuts at the BBC Proms with Sir Andrew Davis and the BBC Symphony, and in New York at Lincoln Center’s Mostly Mozart Festival with Louis Langrée. She also played at the Hollywood Bowl with the Los Angeles Philharmonic and Mirga Gražinytė-Tyla.

In the 2018/19 season, she will make debuts with the Royal Concertgebouw Orchestra, Melbourne Symphony, Liverpool Philharmonic, Danish National Symphony Orchestra, will perform with the Philadelphia Orchestra and Yannick Nézet-Seguin at Philadelphia’s Kimmel Center and New York’s Carnegie Hall, with the Tonkünstler Orchester and Yutaka Sado at the Musikverein and will start a residency at the Zurich Opera with Fabio Luisi and the Philharmonia Zurich for a complete Beethoven concerto cycle. She will also play recitals at Geneva’s Victoria Hall’s Great Performers series, Munich’s Prinzregenten Theater, London’s Queen Elizabeth Hall, Essen Philharmonie, Berlin Philharmonie’s Kammermusiksaal and Carnegie Hall.
In 2015, Beatrice released her first album as en exclusive Warner Classics artist featuring Prokofiev’s 2nd piano concerto and Tchaikovsky’s first concerto with Antonio Pappano and the Accademia Nazionale Santa Cecilia di Roma. The CD received international acclaim including the prestigious Gramophone’s Editor’s Choice and BBC Music Magazine’s Newcomer of the Year Award.
During the 2015-2017 period Beatrice was part of the prestigious BBC New Generation Artist Scheme, allowing her to record a lot of repertoire for the BBC and play with all BBC Orchestras. In April 2016, the Borletti-Buitoni Trust awarded her a fellowship.
In June 2013, Beatrice won Silver (2nd Prize) and the Audience Award at the prestigious Van Cliburn competition.She had attracted international attention at 18, winning 1st Prize and all special prizes at the Montreal International competition in 2011.
A recipient of an impressive number of first prizes in national and international piano competitions, such as “Muzio Clementi” Competition, “International Piano Competition of the Republic of San Marino” and “Bang&Olufsen PianoRAMA Competition”.She now studies with Benedetto Lupo in Rome.
Born to a family of musicians in 1993, Beatrice Rana made her debuts as a soloist with orchestra at the age of 9, performing Bach Concerto in F minor. Beatrice began her musical studies at four and achieved her Piano Degree under the guidance of Benedetto Lupo at the Nino Rota Conservatory of Music in Monopoli, where she also studied composition with Marco della Sciucca. She is based in Rome.