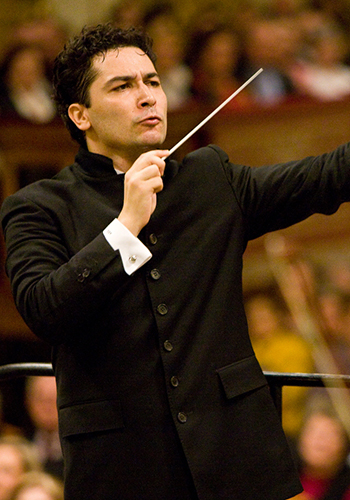 Orozco-Estrada regularly conducts many of Europe’s leading orchestras, including the Vienna Philharmonic, Berlin Philharmonic, Staatskapelle Dresden, Gewandhaus-orchester Leipzig, Koninklijk Concertgebouworkest, Orchestra dell’Accademia Nazionale di Santa Cecilia and Orchestre National de France, as well as the most renowned American orchestras like the Philadelphia and Cleveland Orchestras and Chicago Symphony. He has also conducted concert and opera performances at the Glyndebourne and Salzburg festivals with outstanding success.

Highlights of the 2019/20 season include concerts with the Vienna Philharmonic at the BBC Proms and the Lucerne Festival as well as on tour to China, South Korea and Japan. In spring 2020 he debuts with the New York Philharmonic and returns to the Gewandhausorchester Leipzig.
Furthermore, he leads a new production of “Carmen”, which premieres in May at Dutch National Opera. With the Houston Symphony he presents a new created two-week Schumann-festival including all symphonies. In February he takes over three concerts with the Vienna Symphony Orchestra as its designated Principal Conductor in the Musikverein.

Orozco-Estrada is particularly committed to new concert formats featuring moderation and images where he rediscovers together with the audience well-known pieces of the repertoire – for example in the „Spotlight“ concerts with Frankfurt Radio Symphony or the family concert with the Gewandhausorchester Leipzig.

His releases with Pentatone have attracted considerable attention. With the Frankfurt Radio Symphony he has recorded Stravinsky’s “Firebird” and “Rite of Spring” which were hailed by the critics as “hauntingly beautiful” (Gramophone). Amongst his most recent releases are the “Alpine Symphony”, which forms part of his Richard-Strauss-cycle, which won him the praise of being “a fine Straussian” by Gramophone magazine. His Dvořák-cycle with the Houston Symphony was considered by Pizzicato to be a “zestful Dvořák with warm colours”. In addition, he has recorded all Brahms and Mendelssohn symphonies.

Born in Medellín (Colombia), Andrés Orozco-Estrada began his musical studies on the violin. At the age of 15 he received his first conducting lessons and in 1997 he moved to Vienna in order to study at the University of Music and Performing Arts with Uroš Lajovic, himself a pupil of the legendary Hans Swarowsky. Orozco-Estrada lives in Vienna.