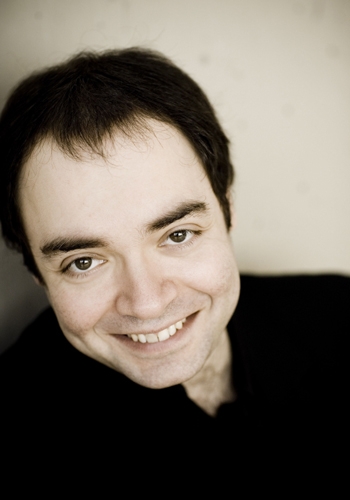 Alexander Melnikov, born in Moscow in 1973, performed Rachmaninov’s First Piano Concerto at the age of 12 and was heavily influenced by Sviatoslav Richter. Melnikov’s involvement with historically informed performance began at 18; today, it continues to play an important role in his repertoire. In addition to performances on the fortepiano, Melnikov shares the stage with Andreas Staier in a special collaboration featuring Shostakovich’s 24 Preludes and Fugues (Alexander Melnikov – piano) and J.S. Bach’s The Well-Tempered Clavier (Andreas Staier – harpsichord).

Melnikov’s recording of the Shostakovich cycle, released in 2010 with harmonia mundi, was awarded the BBC Music Magazine Award 2011 in the instrumental category, “Choc de classica” for the best recording in 2010, and the Deutsche Schallplattenkritik 2010. After a highly-acclaimed performance at Vienna’s Konzerthaus in November 2010, Melnikov will bring this cycle to Berlin, San Francisco, Amsterdam, Antwerp, Tokyo and Nagoya in the 2011/12 season.

Melnikov’s association with the label harmonia mundi arose through his regular recital partner, violinist Isabelle Faust, and in 2010 their complete recording of the Beethoven sonatas for violin and piano won both Germany’s ECHO Klassik prize and a Gramophone Award. This CD, which has become a reference recording of this repertoire, was also nominated for the Grammy. Melnikov has recorded works by Rachmaninov and Scriabin, among others, for harmonia mundi as well; his highly-anticipated recording of Shostakovich’s Piano Concertos with the Mahler Chamber Orchestra and Teodor Currentzis will be released shortly.

As a recitalist, Melnikov has appeared in halls such as the Concertgebouw in Amsterdam, Suntory Hall in Tokyo, the Alte Oper in Frankfurt, Paris’s Theatre du Chatelet and London’s Wigmore Hall. As a soloist, he has performed with orchestras such as the Russian National Orchestra, Tokyo Philharmonic, Gewandhaus Orchestra in Leipzig, Philadelphia Orchestra (under Charles Dutoit), Rotterdam Philharmonic (under Valery Gergiev), Royal Concertgebouw Orchestra, and BBC Philharmonic Orchestra.