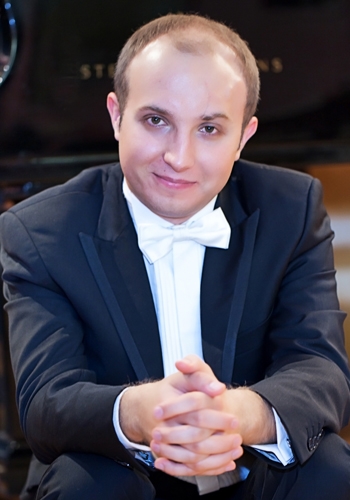 Highlights of the 2018-19 season include debuts with the Philharmonia, Chicago Symphony, Wiener Symphoniker, and City of Birmingham Symphony Orchestra. Other highlights include a return to the Wigmore Hall, as well as return visits to the Hallé, Concertgebouworkest, Sydney Symphony and the Royal Scottish National Orchestra. Gavrylyuk will also tour Europe, Asia & North America in solo recital and appear in duo partnership with violinist Janine Jansen in Berlin, Stockholm, Munich, Zurich, London, Amsterdam and Vienna.

Gavrylyuk regularly visits Japan and Asia, performing with orchestras such as NHK Symphony and Seoul Philharmonic as well as recital tours, often playing to sell-out audiences in Suntory Hall and Tokyo Opera City. He returns to Russia on a regular basis and has performed with the Russian National Philharmonic and the Svetlanov Russian State Symphony Orchestra, as well as recitals at the Great Hall of Moscow Conservatory and at the Kremlin.

At the age of 13, Alexander moved to Sydney where he lived until 2006. He has performed with all the main Australian orchestras including Melbourne and Sydney Symphonies, returning each year for concerts and recitals. In 2009 he made an acclaimed recording of the complete Prokofiev Concerti with Vladimir Ashkenazy and the Sydney Symphony which was recorded live at the Sydney Opera House. In addition to the Prokofiev cycle, he has made several recordings including recital discs of works by Rachmaninov, Schumann, Scriabin, Mussorgsky and Prokofiev. His most recent recording, a recital disc featuring Brahms Paganini Variations and works by Liszt has been widely praised.

Alexander is Artist in Residence at Chautauqua Institution where he leads the piano program as an artistic advisor. He supports a number of charities including Theme and Variations Young Pianist Trust which aims to provide support and encouragement to young, aspiring Australian pianists as well as Opportunity Cambodia, which has built a residential educational facility for Cambodian children.

Alexander is a Steinway Artist and more information is available on his website www.alexandergavrylyuk.com and public page ‘Alexander Gavrylyuk Piano News”.

For the most up-to-date biography, please contact us. This biography should not be edited without permission from Askonas Holt.