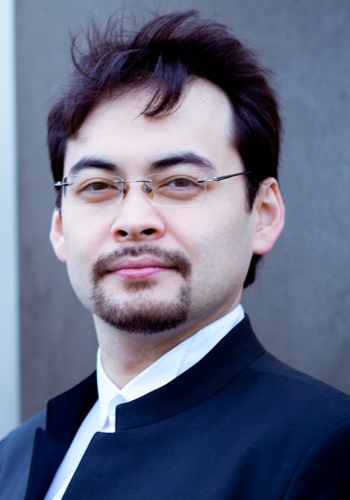 Alan Buribayev began his tenure as Principal Conductor of the RTE National Symphony Orchestra in Dublin in September 2010 while continuing his role as Chief Conductor of the Brabants Orchestra in the Netherlands. Highly acclaimed for his intensity and spontaneity, his precision and musicianship is equally praised, and his success brings him regular invitations to guest conduct at the highest level.

Alan Buribayev has previously worked with many of Europe’s major orchestras, such as the London Philharmonic Orchestra, the St Petersburg Philharmonic and the Dresden Philharmonic, the Leipzig Gewandhaus and the Dusseldorf Symphoniker, the City of Birmingham Symphony and Gothenburg Orchestras as well as the the BBC National Orchestra of Wales, BBC Scottish Symphony Orchestra, and two concerts for BBC Radio 3 with the Ulster Orchestra. He also conducted a production of Tchaikovsky’s Queen of Spades at the Opéra National de Lyon. Elsewhere he has worked with the Baltimore and Oregon Symphony Orchestras and Melbourne Symphony. He also maintains a strong name in Japan having conducted the Sendai Philharmonic Orchestra, Osaka Century Orchestra, Sapporo Symphony as well as the Tokyo Metropolitan Orchestra.

From 2004 to 2007 Alan Buribayev was Principal Conductor of the Astana Symphony Orchestra, a group that he worked with extensively. He succeeded in bringing the group to a very high level, and brought them to perform in Berlin to great acclaim. His tenure as Music Director of the Meiningen Theatre in the same time period brought him extensive experience on the opera platform, with productions including Offenbach: Tales of Hoffman, Mozart: Idomeneo and Marriage of Figaro, Janacek: Jenufa, Weber: Der Freischutz and Strauss: Salome. From September 2006 to June 2011 he was Chief Conductor of the Norrkoping Symphony Orchestra, taking the orchestra on highly successful tours to the Czech republic and also to Vienna.

Alan Buribayev was born in 1979 to a family of musicians; his father is a cellist and conductor and his mother is a pianist. He graduated with honours from the Kazakh State Conservatory as both violinist and conductor, and continued his conducting studies at the University of Music, Vienna with Professor Uros Lajovic. His victory at the Lovro von Matacic Conducting Competition in Zagreb brought him to international attention and this success led to invitations from several European orchestras. In 2001, he reached the final of the Malko Conducting Competition in Copenhagen in which, where no first prize was awarded, he was awarded a Special Prize, which recognized his “outstanding talent and promise”. Alan Buribayev went on to win First Prize in the Antonio Pedrotti Competition in 2001.