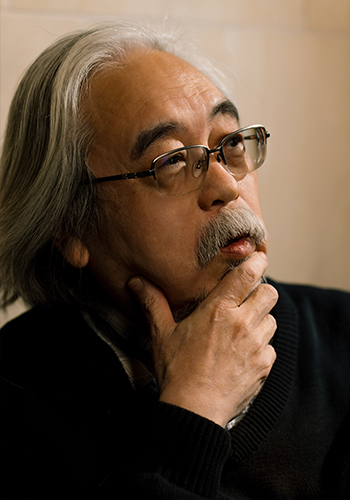 YOSHIMATSU,Takashi was born in Tokyo in 1953, and studied at Keio University (Department of Technology).
He taught himself composition, joined jazz and rock groups, and studied under Teizo Matsumura for a short while.

He argues “new liricism” and objects to unmusical “modern music”.
He has composed many works. He made his debut with his composition, “Threnody to Toki” in 1981.
Since then, he presented 6 symphonies, 10 Concertos, and many other orchestra pieces.
Other works include many stage works, series of chamber music related with birds, piano and guitar works, and other works for Japanese traditional instruments.

He worked on the orchestration of ELP(Emerson Lake and Palmer)’s work ‘Tarkus’ with much success leading to multiple live performances and 2 live recordings.

Many of his works are recorded on CD, including “The Age of Birds / Works by Takashi Yoshimatsu” (Camerata Tokyo).
Since 1998, he was appointed “Composer-in-Residence” of CHANDOS RECORDS.
As well as composing, he spends a lot of time writing articles, music reviews and essays and has published many books including the ‘Illustrated Encyclopedia of Classical Music’ Series which has now been translated and published in Chinese Taipei as well.

Works by Yoshimatsu can be purchased from here:http://asks-orch.com/shopen/
Read more