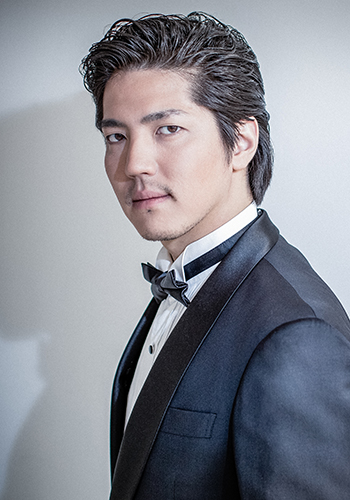 He made his opera debut in Japan when he served as substitute in the title role of “Eugene Onegin” , conducted by Fabio Luisi at the Seiji Ozawa Matsumoto Festival (OMF) in August 2019. The production was a great success. The following September, he appeared in the NHK Symphony Orchestra’s concert-style performance of “Fidelio”, conducted by Paavo Jarvi. He received high praise for both performances.
In January 2019, he sang in “Carmen” at the North Carolina Opera and in 2020, will return to sing in “Pagliacci”. In February 2019, he sang as soloist for the “Kullervo Symphony” with the Oratorio Society of New York at the Carnegie Hall and in 2020 will return to sing with them in “A German Requiem”.
His continued active engagements in Japan and around the world is much anticipated.
Takaoki Onishi received the 30th Gotoh Memorial Cultural Award given to the most promising young talent in Opera.

Graduated from the University and Graduate School of Musashino Academia Musicae.
Winner of Student Music Coucours of Japan, and Gold Prize and Baritone Special Prize at the Concorso di Lirica Italiana. Soon after, won the first prize of IFAC Julliard Prize Singing Competition which provided him a full scholarship and special award to attend the Julliard School, making him one of the few Japanese to major in Vocal Arts there. Upon his graduation from the Julliard School, he was given a Special Award and scholarship for his outstanding activities as a student. He has also studied in Academies in Italy, Germany and Switzerland.

In 2015, he made his professional American debut at the Lyric Opera of Chicago with the role of Father Arguedas in the world premiere of “Bel Canto” which was highly praised by the international newspapers and the classical music press.
From 2015, he became a member of the Ryan Opera Center of the Lyric Opera of Chicago
for three years and have appeared in many productions such as “Eugene Onegin”, “Les pêcheurs de perles(The Pearl Fishers)”, and “Carmen” among others.

Mr. Onishi’s recent appearances in Japan include soloist of Beethoven:Symphony No.9 in various venues and “Carmina Burana” conducted by Norichika Iimori, Brahms:“A German Requiem” conducted by Junichi Hirokami, “Iolanta” (Concert version) with Mikhail Pletnev and the Russian National Orchestra, “War Requiem” with Ken Takaseki and the Kyoto Symphony Orchestra, receiving high critical acclaim.
In December 2018, he appeared as soloist in Beethoven:Symphony No.9 with Ken Takaseki and the Tokyo City Philharmonic Orchestra. In February 2019, he performed as soloist in G.Mahler:Das Lied von der Erde (arr Motoharu Kawashima) with Norichika Iimori and Izumi Sinfonietta Osaka.