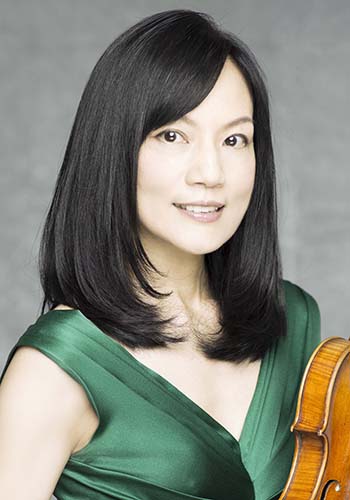 Mariko Senju began studying violin under Saburo Washimi at the age of three and under Toshiya Eto at the age of twelve. In 1973 she won first place in the elementary school division of the All Japan Students Musical Competition. In 1975 she performed a Bach Concerto with the NHK Symphony Orchestra for its first Young People’s Concert. This marked her debut as a professional violinist.
In 1977 she won first place in the violin division of the 46th Music Competition of Japan. In 1979 she placed fourth at the 26th Paganini International Violin Concours, and in 1981 she received special commendation in the 26th Foreign Placement Concours (Japan).
A 1985, she graduated from Keio University’s Department of Literature With a B. A. in Philosophy, and in the following year she passed an audition held by the conductor Giuseppe Sinopoli. In 1987 she made her London debut playing Mendelssohn’s Violin Concerto in a subscription concert of the Philharmonia Orchestra conducted by Sinopoli. In 1988 she received high acclaim for her performances with the Santa Cecilia Music Consevatory’s orchestra, conducted by Sinopoli.
Her CDs include “Mozart: Violin Concertos,” “Vivaldi: The Four Seasons,” “Lalo/Saint-Saens: Violin Concertos” and “Dvorak/Bruch: Violin Concertos” (with the Prague Symphony Orchestra, conducted by Zdenek Kosler). Her eighth CD, “Ysaye: Six Sonatas for Violin Solo (op.27),” received the 1993 award for distinguished artistic works from Japan’s Agency for Cultural Affairs.
In 1990, Senju started regularly producing her own concert series, in which she has performed violin concertos by Beethoven, Brahms, Bach, and Sibelius. In 1991 she held a concert series marking the 200th anniversary of Mozart’s death in which she performed all of Mozart’s violin concertos. In 1993 she enjoyed great success in an ambitious series of performances of all of Ysaye’s Sonatas for Violin Solo.
In 1994 she won the Muramatsu Award. In 1995, which marked the 20th anniversary of her musical career, she gave a series of recitals in London. In January, 1996, she appeared in Prague as a soloist at a subscription concert of the Prague Symphony Orchestra. In April, 1997, her CD, “Paganini: 24 Caprices” was released nationwide in the U.S.
She performed Ysaye’s Six Sonatas for Violin Solo, Op. 27 in Weill Recital Hall at Carnegie Hall in February, 1999 with great success.
In 2000, which marked the 25th anniversary of her debut, she released two CDs entitled, respectively, “Arias” and “Works for Violin Solo by 3 Composers.” Another CD scheduled for release this fall will contain Beethoven’s Violin Concerto, Op. 61 and Mendelssohn’s Violin Concerto, Op. 64, with the Czech National Symphony Orchestra, conducted by Paul Freeman.
Mariko Senju has long been involved with music in Prague. In 1991 she recorded violin concertos by Dvorak and Bruch with the Prague Symphony Orchestra, conducted by Zdenek Kosler, and in 2001, violin concertos by Sibelius and Tchaikovsky with the Czech National Symphony Orchestra, conducted by Vladimir Valek.
She appeared as a soloist during a concert tour of Japan by the Suk Chamber Orchestra in the fall of 2001 – as she had done several times previously. She performed with the Prague Philharmonia, conducted by Jiri Belohlavek in January, 2002. She is also scheduled to appear as a soloist on tour in Japan with the Prague Symphony Orchestra in 2003.
Read more