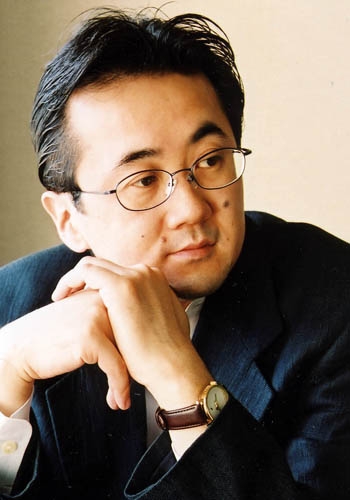 Born in Kanagawa Prefecture, Japan in 1961.
In 1981, he entered the Tokyo University of Fine Arts and Music where he studied composition under prof.Teizo Matsumura. Also he studied harmony and counterpoint under prof. Atsutada Otaka and prof. Masayuki Nagatomi.
In 1986, he graduated from the above university by completing “Meditation Symphonique” with which he won the Japan Symphonic Foundation’s 9th annual best composition prize.
In 1988, he won the 3rd annual Music Today contemporary music and composition award for his “Serenade” for oboe, 2Violoncellos and harp.
From 1989, he has been working as an assistant of Toru Takemitsu, and has also been strongly influenced by him.
In 1990, his 1989 composition “Arioso” for Orchestra was premiered by the Saint Louis Symphony Orchestra conducted by Leonard Slatkin during a tour of Japan. This work won the 1st annual Idemitsu Music Prize in 1991.
In 2010, his Organ piece “Vents de Pèrlinage” was awarded 2010 prix de la Fondation Marcelle et Robert de Lacour pour la musique et la danse, at the “concours 2010 de composition d’orgue du Festival de Saint-Bertrand de Comminges”

He has been commissioned to work for Tokyo Philharmonic Orchestra (1991), Osaka Symphoniker(2003), Aki Takahashi (1989), and other Japanese performers. Furthermore, his works was introduced by other foreign performers such as Slovak Chamber Orchestra (1995), English Chamber Orchestra (1999), Orchestra of the Age of Enlightenment (2001), Prague Symphony Orchestra (2004), Haydn Trio Eisenstadt (2009), Austro-Hungarian Haydn Philharmonic (2009) etc.
In 2009, he was invited to Haydn Festival in Eisenstadt as one of the composers commissioned for the bicentenary year worldwide composition project “Dedicated to Haydn”.
Kakinuma has acquired a broad familiarity with music for Noh theater, original works for the Shakuhachi and other types of traditional Japanese music, as well as classical artistic music of other asian countries. His works are basically founded on these musical modes. He is attracted by music that offers such rich potential for performances as to obliterate the composer’s existence. He seeks to attain “the ultimate moment, through music whose concepts are utterly free of the limitations of words or logic.” This goal is strongly linked to his own experiences in performing Asian music.