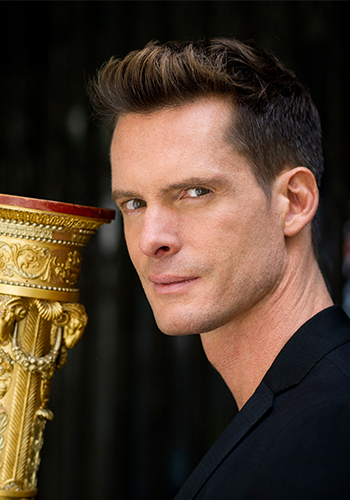 No one could have imagined at that time what to expect – like Xavier de Maistre himself, when he decided to change the face of the harp 16 years ago. Today he plays pieces like “Moldau” by Smetana in breathtaking precision and presents masterful pieces of music that are usually played by an entire orchestra.

Meanwhile, a worldwide audience listens to his virtuosity and enjoys the unprecedented sounds. Pieces, that no harpist played before, or even thought about – like the Haydn piano concertos. Not only that makes him one of the most extraordinary musicians, even masters of this time.

Xavier de Maistre began to study harp with 9 years. Like many other famous musicians, all started with love – but in this case not as expected the love to his harp.

It was rather the love for his former teacher, who offered extra harp lessons. Early, it turned out that Xavier has a great talent and no wonder he started with 25 years to play for the Vienna Philharmonic. Before that he played 3 years for the Bavarian Radio Symphony Orchestra and in 1998 Xavier won the first prize of the “USA International Harp Competition“, the major harp competitions in the world. But since Xavier´s family is not from a traditional harp-playing dynasty they put great importance to a solid education. So Xavier started his study of politics at the ?Institut des Sciences Politiques“ in Paris and spent 1 year in London at the ?London School of Economics “, when he finally decided to prefer music to the political studies. For a musician, he achieved very early what all harpists dream of ? a position in one of the best orchestras in the world, the Vienna Philharmonic.
However Xavier de Maistre was about to go on. To see this point as the highlight of the career, which would definitely be a great honor for most of the harpists, and aslo for Xavier, but it was also a kind of sad moment. He achieved the ultimate goal of a harpist at age 25. Through his countless appearances and his keen ambition he has always wants to refute the long-existing bias of the harp – played in the background by angel-like women. Thanks to his his quick anticipation, intelligence and tremendous skill, he has played many pieces as a soloist with the harp and delighted thousands of listeners. Finally, he succeeds to establish the harp as an independent instrument. During his career, many great conductors such as Riccardo Muti, Sir Simon Rattle, Sir Andre Previn, and Daniele Gatti became curious on him and his passion and asked him to play with them. A long series of concerts follows, convincing the audience that Xavier de Maistre is undoubtedly the master of his instrument. Not for nothing, beside famous conductors, also the most successful singers like Barbara Bonney, Kathleen Battle and Diana Damrau played with him. Likewise, of course, the long list of world-renowned opera houses which he had already visited: Theatre des Champs Elysees Paris, Concertgebouw Amsterdam, Musikverein Vienna, Tokyo Opera City, Lincoln Center New York, Salzburg Festival, La Scala Milan and many others.