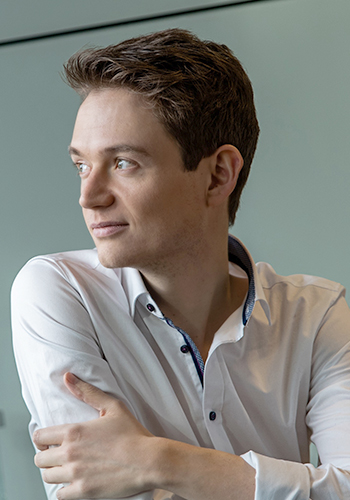 I have known Felix for many years now and I’m proud to see how he has developed his talent.
Felix is a very good conductor with a strong musicality and skill.
He will have a bright future ahead of him.

We were looking for a young conductor of great talent and international experience and reputation, a leader able to continue and develop the excellency and quality of the Filarmonica TRT. And we were looking for someone on whom we can count, in whom we can believe and with whom we can build a long-term relation in order to continue this path of growth and success of the orchestra. The musicians have found all this in Felix, so we are extremely delighted that he accepted, and looking forward to a great artistic future.

Felix Mildenberger has been appointed Principal Guest Conductor of the Filarmonica Teatro Regio di Torino from 2022, taking his already close collaboration with the orchestra to a new level.
A continued scholarship holder of the Dirigentenforum, in 2021 Felix Mildenberger was added to the so-called “Maestros of Tomorrow”– a list of artists having proven long-standing artistic quality. The award goes to those having received second level of support by the Deutscher Musikrat. A year before, he was the first conductor to receive the “Prix Young Artist of the Year” from the Rupert-Gabler-Stiftung at the Festival der Nationen.

Graceful, versatile, and highly musical – these are just some of the characteristics that distinguish Felix Mildenberger as a conductor. Orchestras appreciate the deep seriousness of his approach to music and his great musicality, combined with his gentlemanlikeness. This includes the London Symphony Orchestra, where he conducted numerous concerts since winning the Donatella Flick LSO Conducting Competition in 2018 and served as “Assistant Conductor” to Sir Simon Rattle, François-Xavier Roth and Gianandrea Noseda among others.

In 2021 he accompanied Herbert Blomstedt on his US tour with the Boston Symphony Orchestra and the Cleveland Orchestra. Before, he was Assistant Conductor of Paavo Järvi at the Tonhalle-Orchester Zürich, of Emmanuel Krivine at the Orchestre National de France in Paris and “Cover Conductor” to Bernard Haitink at the Royal Concertgebouw Orchestra. In opera productions he assisted Jane Glover at the Aspen Opera Center and Jukka-Pekka Saraste at the Bavarian State Opera in Munich. Furthermore, he conducted concerts as part of the Impuls Festival for New Music. Felix Mildenberger is Chief Conductor and Artistic Director of the Sinfonieorchester Crescendo in Freiburg, which he co-founded in 2014.

Highlights of the 2021/22 season include the New Year’s Concert with the Frankfurt Radio Symphony as well as his debuts with the Deutsche Radiophilharmonie Saarbrücken Kaiserslautern and the Deutsches Symphonie-Orchester Berlin. Moreover, he will return to the Stuttgart Philharmonic, the Basel Symphony Orchestra and the St. Petersburg State Capella Symphony Orchestra.

Felix Mildenberger received his first musical education in violin, viola and piano, and subsequently studied conducting in Freiburg and Vienna as well as at the Aspen Music Festival. His teachers include Prof. Lutz Köhler, Gerhard Markson, Prof. Mark Stringer, Prof. Scott Sandmeier, Massimiliano Matesic and Alexander Burda. In addition, as part of masterclasses he studied with David Zinman, Paavo Järvi, Bernard Haitink, Markus Stenz, John Carewe and Gabriel Feltz. From 2015 to 2017, he was a lecturer for orchestral conducting at the Hochschule für Musik Freiburg and held a masterclass for young conductors at Mozarteum University during Salzburger Mozartwoche 2020.