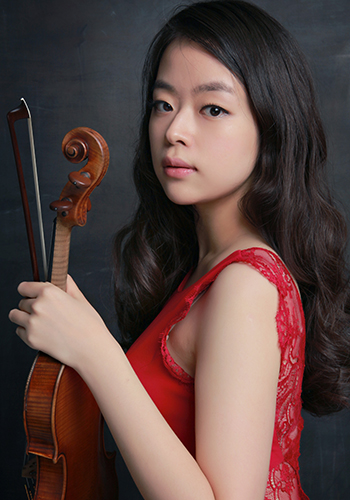 Dami Kim, who was born in South Korea in 1988, began playing the violin at the age of five. In 2002 she was admitted to the Aaron Rosand’s class at the Curtis Institute of Music in Philhadelphia.

She subsequently studied with Miriam Fried at the New England Conservatory in Boston, where she graduated with a Master’s degree in 2012.

As part of the prize she was presented with a violin by Giovanni Battista Guadagnini. She was awarded further prizes in the Premio Paganini International Violin Competition, for example, where she also won the prize for the best interpretation of a Paganini Caprice.

The Korean violinist has performed with several orchestras throughout Europe, America and Asia, such as the NDR Radio Philharmonic, the Munich Chamber Orchestra, the Orchestre Royal de Chambre de Wallonie and the Philadelphia Orchestra. She has worked with renowned artists such as Shlomo Mintz, Donald Weilerstein, Curtis Macomber, Atar Arad and Itamar Golan. She also has a particular interest in chamber music and takes part regularly in chamber music festivals such as the Ravinia Festival, the Yellow Barn Festival, the Taos Festival and the Aspen Music Festival.

Since October 2013 Dami Kim has been studying as a Young Soloist at Kronberg Academy with Mihaela Martin. These studies are funded by the Lutz Raettig Stipendium. She plays a Stradivarius 1731 She currently performs on a Stradivarius, 1731 on loan from Yellow Angel Foundation in Japan.